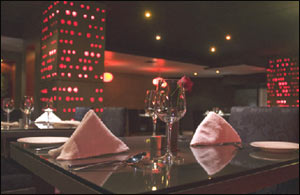 The location dangerously screams upper-crust. The impeccably set tables and the elegant interior proudly join the chorus. The prices follow suit, as you discover that the price band for the food here begins at a little less than Rs. 200.

Space, refreshingly, isn't at a premium here. Right from the roomy waiting area, to the expansive insides of the restaurant, Hyd Park II doesn't make the mistake of suffocating you - neither by squeezing tables so close you're compelled to take part in conversation at your neighbouring table, nor by cramping you with elaborate interior decor.

What you have, instead, are melon-shaped electric lanterns letting off a soft orange lustre, and aesthetically pockmarked pillars aglow with ruby red lights peering from inside. Warm lighting fills up the interiors of Hyd Park II, and the neatly set glassware on the shiny glass-cased tables can't help twinkling and setting off a subdued glitter. Life-sized dramatically-shot photographs of the Hyderabadi landscape and its people adorn the walls.

The sparkle inside the restaurant complements the pretty night-time view from its window tables. Set on the 7th floor of Shangri La Plaza, this place overlooks the L V Prasad Marg in Jubilee Hills, a street that easily figures amongst the glitterati of Hyderabadi roadways, post sunset, at least.

Still, the place isn't romantic enough for a dedicated date - there aren't enough two-seater tables, and the few couches present aren't too comfortable if you're planning to lounge about for long. A business dinner or a family outing, though, are likely to be a hit here.

Hyd Park II serves Indian, Chinese and a smattering of Continental food. The menu is something that a herbivorous tee-totaller won't be able to do complete justice to, when compared to his diametrically opposite counterpart. For the Indian section, the vegetarians have 7 starters and a dozen main course dishes to choose from, as against 17 starters and 15 dishes for the non-vegetarians. Chinese non-vegetarian dishes are more than twice in number than the vegetarian dishes as well.

Starters are aplenty here, and the restaurant recommends the Paneer Papdi for the vegetarians, and Murg Makhmali and Zafrani Chops for the non-vegetarians. If you're in a group, the combo platters might work out to be a good deal, if you don't mind stuffing yourself before the main course.

It's heartening to see that the monotonously regular names are not featured on the menu, and the Indian spread, specially, has touches of adventure in it. What else can explain a Tulsi Paneer Tikka and a Pista Paneer? The Rajasthani Naan is something else you won't find in too many places, and the sea food might set some tummies growling as well.

The breads are limited to the Roti, the Naan, the Rumali Roti, the Bhatura, a special Paratha and a Rajasthani Naan, and rice-eaters have Chicken or Mutton Biryani, Jeera Pulao, Peas Pulao and Vegetable Pulao to choose from. Curd Rice, surprisingly, finds a place here, too.

But while the Indian and the Chinese menu is quite detailed and interesting, the Continental section isn't very elaborate, though like at many other places, pasta-obsessed diners are given their due. There are also quesedillas on the menu, and fish fingers and chicken nuggets, too.

Desserts are all priced at Rs. 75, with just the basics - ice creams, Gulab Jamun, Date Pancakes and the ubiquitous Double Ka Meetha. And finally, guzzlers have plenty of cocktails and mocktails to wash it all down with.

ADVERTISEMENT
This page was tagged for
Rainbow bar incident in banjarahills
separate cabin present restorent in madhapur
are bars closed on holi 2013 hyd
ruby tv hyderabad news banjara hills accident on 10 february
hyhd bars
Follow @fullhyderabad
Follow fullhyd.com on
About Hyderabad
The Hyderabad Community
Improve fullhyd.com
More
Our Other Local Guides
Our other sites
© Copyright 1999-2009 LRR Technologies (Hyderabad), Pvt Ltd. All rights reserved. fullhyd, fullhyderabad, Welcome To The Neighbourhood are trademarks of LRR Technologies (Hyderabad) Pvt Ltd. The textual, graphic, audio and audiovisual material in this site is protected by copyright law. You may not copy, distribute, or use this material except as necessary for your personal, non-commercial use. Any trademarks are the properties of their respective owners. More on Hyderabad, India. Jobs in Hyderabad.