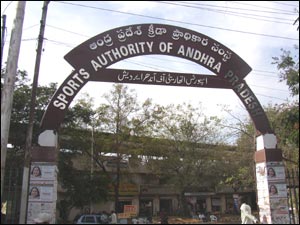 Priyanka Pulla / fullhyd.com
Shuttlecocks and Table Tennis balls tick to and fro like pendulums inside the giant steamy bowels of the Lal Bahadur Stadium. It's a scene almost out of Van Damme's Kickboxer; a massive, uncomfortably warm hall with courts in the middle and steps all around for enthusiastic watchers who cry for blood. Except, these watchers are middle-aged parents, egging on their own kids with equally fervent zeal.

The heat doesn't seem to make any difference to the droves and droves of youngsters, from little girls in shorts and pig-tails to well-built and clearly practiced sportsmen, all playing side by side, taking turns frantically to pit against their coaches. They do not seem to be getting too much time playing in each turn, but they are clearly fiercely involved in the game.

The Lal Bahadur Stadium in Gunfoundry, the venue of the above scene, plays host to an exhaustive array of sports coaching programs by the Sports Authority Of Andhra Pradesh. That means Volleyball, Swimming, Tennis, Cricket, Athletics, Football, Badminton, Table Tennis, Boxing, Judo, Wrestling and Tennikoit. Gachibowli, Saroornagar and Yousufguda have other SAAP centers, but this one is distinguished by its swimming pools, and the tennis courts on which the 2004 Hyderabad Open matches were played.

For all those who might someday count themselves in the ever-expanding ranks of international class sports players from Hyderabad, the SAAP coaching programs may well be a rite of passage. Sania Mirza, Pullella Gopichand, K Malleshwari, Gagan Narang, Ravikant Reddy... everybody who is anybody on the Hyderabad sporting scene, seems to have passed out of these haloed courts.

Apart from the incomparable facilities, it is the 40-45 eminent coaches for the various games who draw all the talent here. There is Boxing's Omkar Yadav, Judo's Zia-Ull-Abideen and Weightlifting's Narottam Reddy, and that's naming samples.

Big league events such as the Afro-Asian Games and National Games have been hosted on these courts, while all district level events throughout Andhra Pradesh are also sponsored by SAAP.

The fees are minimal, but the coaches do exercise discrimination while taking students in for their Pay And Play program. Even after you are in, if you do not make the requisite progress, chances are you will be asked (ceremoniously, don't worry) to discontinue. So those who stick on are top-drawer material, and the group profile is already optimal for the stiffest competition. Also remember, you might not get all the individual attention you want if you are not picking up the game fast enough. This is clearly an arena where only the fittest survive.

Greetings from M.R.College for Women, Vizianagaram, Andhra Pradesh. We are very happy to inform you that we are holding a National Seminar on " Trends, Problems and Prospects of Physical Education â€ organized by the Physical Education Department of the College on 21st January 2017. We request you to kindly depute your Faculty on duty to participate and present the paper in the National Seminar.

ADVERTISEMENT
This page was tagged for
can we play cricket in saap gachibowli stadium
saap volleyball association
MD & vice chancellor of Sports Authority of AP
Mohan C Narayana sports authority of andhra pradesh
saap boxing acedemy hyderabad
Follow @fullhyderabad
Follow fullhyd.com on
About Hyderabad
The Hyderabad Community
Improve fullhyd.com
More
Our Other Local Guides
Our other sites
© Copyright 1999-2009 LRR Technologies (Hyderabad), Pvt Ltd. All rights reserved. fullhyd, fullhyderabad, Welcome To The Neighbourhood are trademarks of LRR Technologies (Hyderabad) Pvt Ltd. The textual, graphic, audio and audiovisual material in this site is protected by copyright law. You may not copy, distribute, or use this material except as necessary for your personal, non-commercial use. Any trademarks are the properties of their respective owners. More on Hyderabad, India. Jobs in Hyderabad.