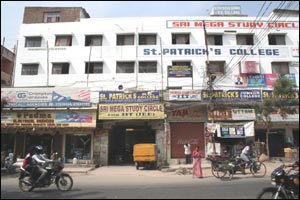 Ramakant D S / fullhyd.com
Krishnamurthy's erstwhile institute is not to be confused with the other "gulli" coaching centers here. It is situated very much on the OU Main Road. Thanks to the numerous tutorials in the area, you begin to wonder why they call the place "Vidyanagar". A typical scene during the early mornings (as in 9:30am!) would be a horde of pimple-faced boys and girls trying to solve a Definite Integral problem while crossing the road.

ADVERTISEMENT
This page was tagged for
Megha study circle is closed
sri mega academy junior clg nallakunta hyd
sri megha iit academy address and contact
Sri mega circle nallakunta
srimegastudy cricle
Follow @fullhyderabad
Follow fullhyd.com on
About Hyderabad
The Hyderabad Community
Improve fullhyd.com
More
Our Other Local Guides
Our other sites
© Copyright 1999-2009 LRR Technologies (Hyderabad), Pvt Ltd. All rights reserved. fullhyd, fullhyderabad, Welcome To The Neighbourhood are trademarks of LRR Technologies (Hyderabad) Pvt Ltd. The textual, graphic, audio and audiovisual material in this site is protected by copyright law. You may not copy, distribute, or use this material except as necessary for your personal, non-commercial use. Any trademarks are the properties of their respective owners. More on Hyderabad, India. Jobs in Hyderabad.