Asa Bhanu Japan Center (Center For The Exchage Of Culture) 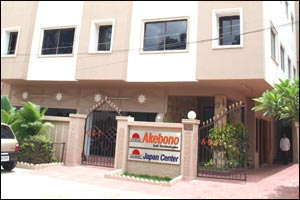 Amulya Rajan / fullhyd.com
Asa in Japanese means morning, and Bhanu in Sanskrit means sun. Put the two together, and you get a non-profit organization employing two Japs and a lot of Indians, striving hard to improve Indo-Japanese relations.

Mr. and Mrs. Ramabhadra lived in Japan for donkey's years before they came back to India and set up Asa Bhanu. It was the child borne out of their love for Japan. Symbolising a new dawn in Indo-Jap relations, this organization is the first of its kind in Hyderabad.

Before we get into anything more complex, let's see what living the life of a Japanese would mean - a lunch break of 15 minutes on a normal working day, working overtime on a union strike, probably two nights of quality family time in a year, and, as a result, on Christmas, along with the Christmas Tree, hiring a maid, a pet and grandparents.

Asa Bhanu looks at the bright side of the picture. It deal mainly with courses teaching the Japanese language, interpretations, translations, Origami, Ikebana, the Japanese dance, the Japanese Green Tea Ceremony and a lot of other Japanese rituals and traditions. In fact, worst comes to worst, as you enroll, your feet will be tied up and you will be given a lesson on family planning.

They employ two Japanese teachers who are named Maeda San and Ona San, and one Indian teacher Ramu San, who all specialize in teaching the tongue-twisting tongue. (San is the equivalent of 'ji' in the language.)

The language seems to be going places in Hyderabad. They conduct a 6-day course in Bharathi Vidya Bhavan for Rs. 200. This constitutes 4 language and calligraphy classes, one Ikebana class and one Origami class. Basically, you would be twisting your tongue, then twisting your fingers, and lastly twisting your imagination. This is their first such undertaking, but they look forward to more in the future.

On a regular basis, they conduct classes at their center itself. The language is taught in three levels - 4th, 3rd and 2nd, with the first being the 4th, the second the 3rd and the last the 2nd.

As you see, the Japs have a very different view of life, probably owing to their slightly twisted position on the globe. They have also started an only-conversation class for those who would like to take one step at a time, one twist at a time.

ADVERTISEMENT
This page was tagged for
Asa Bhanu Japan
ASA BHANU JAPAN
Asa Bhanu Japan Center
ASA Bhanu Japan Center
asa bhanu japanese language
Follow @fullhyderabad
Follow fullhyd.com on
About Hyderabad
The Hyderabad Community
Improve fullhyd.com
More
Our Other Local Guides
Our other sites
© Copyright 1999-2009 LRR Technologies (Hyderabad), Pvt Ltd. All rights reserved. fullhyd, fullhyderabad, Welcome To The Neighbourhood are trademarks of LRR Technologies (Hyderabad) Pvt Ltd. The textual, graphic, audio and audiovisual material in this site is protected by copyright law. You may not copy, distribute, or use this material except as necessary for your personal, non-commercial use. Any trademarks are the properties of their respective owners. More on Hyderabad, India. Jobs in Hyderabad.