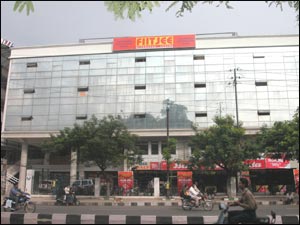 C Venkatesh / fullhyd.com
I joined FIITJEE on 6th August, and have never enjoyed a weekend since then, blogged an 11th class student. "Small Price," he went on, "to pay when your goal is IIT".

Sentiments like these are not new, of course. The IITs have been holding their JEEs (Joint Entrance Exams) for decades now. And coaching institutes have, like flowers on desert sands, bloomed and withered as the decades have passed. Legions of students - some earnest, some disinterested, some miserable, some carefree - have walked through the halls or wrestled with the mock tests and correspondence lessons of various institutes.

What's new is the method FIITJEE has brought to marketing itself. And to making the whole effort a process in which the mills grind exceeding small.

The institute is devoid of personality-centric superstars, with the focus being on building a large and competent corps of trainers to provide fairly uniform training across the several centers.

Opinions differ of course, as to whether exam-specific coaching centers are a boon or a blot. But there's no denying that there's big money being made. Without in any way endorsing the need for students to spend years studying for one exam ? the format of which, by the way, is being redone (as we write this in early 2006) by the IITs to discourage coaching! ? there's no denying that the guys at FIITJEE know their job.

Both the marketing folks and the trainers.

Several years old now, FIITJEE has grown into more than just a cram-center for potential Americans. It is now even a full fledged Junior College, though that's optional for students.

Admission is also fairly liberal. This is a welcome change from centers which pick the best-performing students, then grab credit for their "better" performance in entrance exams.

The FIITJEE counselors freely agree that several of their students enroll with multiple coaching centers. The differentiating factor, they say, is the fact that the frequent mock tests are countrywide. This gives the aspiring student a chance to benchmark himself or herself against a larger population of aspirants.

At least, that's the theory. And it seems to be working.

Statistics on entrances are as reliable as circulation figures of the nation's daily newspapers, so it's better not to use that as a yardstick. Even if they are accurate, it's difficult to ascribe credit when multiple centers have provided "input" to the adolescent mind.

Where the FIITJEE's method seems to work is in the fact that several students say that the focus is on the fundamentals, which helps them handle their class-work better. The faculty are, by and large, approachable and patient. None of the slam-the-door-in-their-face or bust-their-attitude approach.

There are courses for the 9th and 10th graders, and courses for the 11th and 12th graders. The first, of course, is called Ascent, and the second is called Pinnacle. Any parent who can understand the schedule of fees would probably have passed the math section of the IIT-JEE. There are various structures and myriad discounts. But it's safe to conclude that it's not cheap.

It's hard to decide whether the FIITJEE is better than other courses, particularly old stalwarts like Brilliant. What's clear is that FIITJEE has done a much better job of packaging itself.

It's also clear ? or at least it should be ? that coaching a large population for an entrance exam that selects only a certain number of students instead of a percentile, is self-defeating for the majority. But hope springs eternal in the human breast. And reflects in the bank balances and balance sheets of coaching centers.

But philosophical arguments aside, you could certainly do worse than FIITJEE.

ADVERTISEMENT
This page was tagged for
TETRAHEDRON EDUCATION ACADEMY SAIFABAD
fiitjee narayanguda junior college
is there a canteen in fiitjee aidabad campus
Fiitjee junior college for MEC in hyderabad telangana
fiitjee saidabaf
Follow @fullhyderabad
Follow fullhyd.com on
About Hyderabad
The Hyderabad Community
Improve fullhyd.com
More
Our Other Local Guides
Our other sites
© Copyright 1999-2009 LRR Technologies (Hyderabad), Pvt Ltd. All rights reserved. fullhyd, fullhyderabad, Welcome To The Neighbourhood are trademarks of LRR Technologies (Hyderabad) Pvt Ltd. The textual, graphic, audio and audiovisual material in this site is protected by copyright law. You may not copy, distribute, or use this material except as necessary for your personal, non-commercial use. Any trademarks are the properties of their respective owners. More on Hyderabad, India. Jobs in Hyderabad.