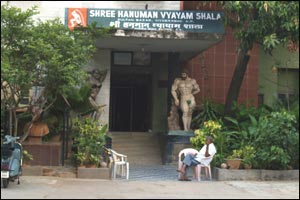 Priyanka Pulla / fullhyd.com
Both the words are fearsome, and that is what Hanuman Vyayamshala indeed is. One of the landmarks of Hyderabad, it was here that the badam chomping, jori (wooden club) swinging pahalwans of yesteryear Bollywood movies were originally prototyped. Its name has become a generic for gyms now, but this humble-looking structure that sits non-descriptly in a Sultan Bazaar gully, is the mother of all Hanuman Vyayamshaalas across the country: the oldest and the original, the first and the best, the forerunner and the archetype for physical culture among youngsters across India.

The reigning theme in the architecture is vermillion and the reigning motif is Hanuman, the patron deity of Indian wrestlers whose imposing musculature rises above the arched gate, welcoming all who enter. A full-fledged Hanuman temple sits by the gate, too. Religion clearly plays a penetrating role in the activities of this place.

By the time you get here, you are well aware that these 50-year premises are the landmark the surrounding area is known by today. You ask someone for Hanuman Vyayamshaala and they ask you back where in Hanuman Vyayamshala you want to go. Like an ageing Banyan tree, the legendary gym has sunk its roots to claim the identity of the whole area around it.

A vyayamshaala, as most of us don't know, is an anthropologically rich entity - not just a gym, but also a place where fellow wrestlers and pahalwaans bond and pursue a common ideology and a way of life that is a lot more than just a fitness regime. And when there is ideological bonding, political motivations soak right into the medium, like ink into a sponge. That explains the active participation of members here in the Razakar movement, the freedom movement and, more recently, the Telangana movement. The pahalwaans here have, in the past, been to the Sholapur border, the Telangana regions, and even prison in their various struggles.

Enough said you don't really need a discourse in history to see it dripping out of the age cracks in the flagstones on the gym floor, the stone barbells (nalas) or the mud wrestling pit. The place is as ancient as ancient gets. Sometimes ridiculously so, like in the oldest gym room with its wire grid windows, wooden benches, and even musty air. The walls have tacky prints of beefy men and muscled women in bikinis, and there is a happily narcissistic profusion of full-length mirrors all around.

There are 4 gyms in all - two old ones, one mud wrestling pit, and one new 4,900 sq. ft. one, supposedly the largest in the country.

Believe it or not, around 2,000 people in all come to train here everyday in the morning and evening put together! It is hard to imagine that when you first step into the foyer, but then you realise that one ground leads to another, one gym follows another, and altogether it is built like a whopper of a honeycomb.

And the predecessors to these trainees have been stalwarts of their time, having accomplished enough to swear by the Vyayamshaala's "doodh, badaam aur kasrat" routine. They have, of course, won other awards, but the Mr. India contests every year are conducted by HVS too. Ekambaram, Salim and Chandrasekhar are some of the Mr. India winners, and weightlifting champions like Arjun, bodybuiders like Mohan, swimmers like Hyder Ali and many more justify HVSs repute.

ADVERTISEMENT
This page was tagged for
hanuman vyayam shala 1 hyderabad
koti ym shala
Hanuman vyamashala hyderabad
hyedarabad vyayamama shala amerpet
hanuman vyayam shala gym address
Follow @fullhyderabad
Follow fullhyd.com on
About Hyderabad
The Hyderabad Community
Improve fullhyd.com
More
Our Other Local Guides
Our other sites
© Copyright 1999-2009 LRR Technologies (Hyderabad), Pvt Ltd. All rights reserved. fullhyd, fullhyderabad, Welcome To The Neighbourhood are trademarks of LRR Technologies (Hyderabad) Pvt Ltd. The textual, graphic, audio and audiovisual material in this site is protected by copyright law. You may not copy, distribute, or use this material except as necessary for your personal, non-commercial use. Any trademarks are the properties of their respective owners. More on Hyderabad, India. Jobs in Hyderabad.