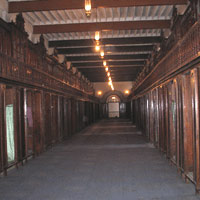 Ayanti Guha / fullhyd.com
The Nizam's Museum is located in the once-upon-a-time stately Purani Haveli, the palace acquired around the year 1750 by the second Nizam and now converted into a museum with a fascinating collection (the palace was apparently built a staggering 400 years back, but still stands strong). You won't find too much of yesteryears' Nizamiian art, as all the classy artefacts are in the Salarjung Museum. But for a little bit of spicy Nizamian history, this is just what the doctor ordered.

The museum hosts the gifts and mementos presented to the last Nizam on the occasion of the silver jubilee celebrations in 1936 to mark the Haveli's birthday. The gifts alone would make this palace worthy of membership to the European Union - a stunning 1930 Rolls Royce (all glittering and attractice), a Packard (slighly ill-maintained, but classy nevertheless) and a Mark V Jaguar are among the vintage cars that were a part of the goodwill of the well-wishers and are now displayed to salivating car freaks.

For art lovers, there's an interesting collection of blue-print models, made in silver, of all the prominent buildings of the city including the A P High Court, the Osmania General Hospital, the Salarjung Museum, the Central Library and the Purani Haveli itself.

For the 'pious' visitors, there are citations in Urdu about H E H Mir Osman Ali Khan. A gold-burnished wooden throne used for the silver jubilee celebrations, a gold tiffin box inlaid with diamonds, a sizzling gold model of the Jubilee Pavilion, silver coffee cups studded with diamonds, and a silver filigree elephant with mahout are some of the items that will have your head spinning at the opulence on display.
Share. Save. Connect.
Tweet
HEH THE NIZAM'S MUSEUM SNAPSHOT
EVENTS AT HEH THE NIZAM'S MUSEUM
There are no events at HEH The Nizam's Museum scheduled currently.
HEH THE NIZAM'S MUSEUM USER REVIEWS
1 - 1 OF 1 COMMENTS
POSITIVE  |  NEGATIVE |  NEWEST  |  OLDEST  |  MOST HELPFUL  |  LEAST HELPFUL
USER RATING
8.5
2 USERS
Collection
Serenity
Cleanliness
10.0
9.0
5.5
Sudheer Rao on 10th Mar 2009, 12:24pm | Permalink
The Museum needs publicity. Many local civilians dont know the existance of this place. There is definitely a better way of showcasing this place. the cleanliness is definitely a minus.

ADVERTISEMENT
This page was tagged for
heh museum
Heh stands for of nizam
heh nizam archelogical museum Hyderabad
nizams silver jublee address
nizam silver jubilee museum Hyderabad
Follow @fullhyderabad
Follow fullhyd.com on
About Hyderabad
The Hyderabad Community
Improve fullhyd.com
More
Our Other Local Guides
Our other sites
© Copyright 1999-2009 LRR Technologies (Hyderabad), Pvt Ltd. All rights reserved. fullhyd, fullhyderabad, Welcome To The Neighbourhood are trademarks of LRR Technologies (Hyderabad) Pvt Ltd. The textual, graphic, audio and audiovisual material in this site is protected by copyright law. You may not copy, distribute, or use this material except as necessary for your personal, non-commercial use. Any trademarks are the properties of their respective owners. More on Hyderabad, India. Jobs in Hyderabad.