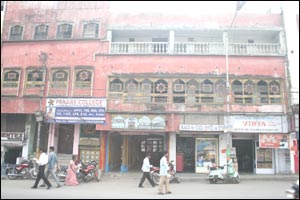 Ghazala Rizvi / fullhyd.com
Several bad accidents have happened to people who stand on their heads in ecstasy over his canvases, and some even to those who do so just to understand art better. P T Reddy's art is known to have that effect, on both the connoisseurs and the greens.

Pakala Thirumal Reddy was a man of many shades, working tirelessly over a career spanning 60 years - on wood (bought from the local mandis) and canvas, and using oil paints, water colors and sketch pens. Over the years, he produced more than 3,000 paintings, the majority of which are well-preserved at Sudharma.

Sudharma looks rickety, with its Hawa-Mahal like balconies facing the road. But the fact that they have held their sway since 1972 is indication enough of the tenacity of the man behind the scenes. Decades saw him building the collection that now graces the 3 floors of the building, and then some more.

A major part of his work was done during the tumultuous freedom struggle, and then during the muscle-flexing that occurred while the Indian Diaspora was building its own identity. His versatility and genius is reflected in the diverse themes, medium and colors that he used to gloss his art with.

Besides these, the museum's collection includes paintings of his contemporary artists like F N Souza, Mohan Samant and K S Kulkarni, and also younger artistes like Laxma Goud, D L N Reddy, Vaikuntam and many others.

Established in 1972 and functional till Reddy's death in 1996, the museum is not open to the casual surfer. For people genuinely interested in his work, and for those who keep an academic interest, Laxmi Reddy is only too eager to oblige. The browsing is free, but you have to book a prior appointment. With the government's attempts to shift the works of art to the Salar Jung Museum, and Reddy's demands of an independent place and a sustainable stipend, the museum might well stay where it is. But let's hope it gets back into the mainstream of art soon enough.

ADVERTISEMENT
This page was tagged for
p t reddy artist
sudharma Hyderabad
PTReddy&Lakshmi paenitig
P T Reddy&Lakshmi Paenitigs
sudharma water colors painting
Follow @fullhyderabad
Follow fullhyd.com on
About Hyderabad
The Hyderabad Community
Improve fullhyd.com
More
Our Other Local Guides
Our other sites
© Copyright 1999-2009 LRR Technologies (Hyderabad), Pvt Ltd. All rights reserved. fullhyd, fullhyderabad, Welcome To The Neighbourhood are trademarks of LRR Technologies (Hyderabad) Pvt Ltd. The textual, graphic, audio and audiovisual material in this site is protected by copyright law. You may not copy, distribute, or use this material except as necessary for your personal, non-commercial use. Any trademarks are the properties of their respective owners. More on Hyderabad, India. Jobs in Hyderabad.