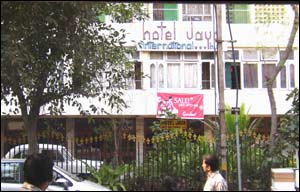 There was a time when Jaya was a star hotel, almost in the top 10 of town. Indeed, appearances belie.

Or maybe they do not. It's tempting to believe that Jaya deserves to be where it has gotten itself today - more of a luxury lodge than a professional hotel. There's only so much benefit of doubt that you can give a hotel the automatic doors of whose lift have to be pried open by a strong person - who's not surprised at the situation at all.

Tell-tale signs of negligence are all over the 5-storeyed property - from the facade itself that looks badly in need of a facelift, to the soiled draperies in the rooms, which are usually the surest distinguisher of mass from class. The house-keeping staff are increasingly poorly trained, resulting in service standards affected badly. And even the front-office staff are dressed very casually and very ordinarily. Like they say, how the mighty have fallen.

The upshot of all this, however, is that Jaya has no option but to charge very modestly, turning into a very tempting proposition where value for money is concerned. An double room with a TV costs Rs. 660 (and single Rs. 550, as we write this in Mar 2008), quite competitive for a hotel this size about a kilometer from the railway station. The rooms are also spacious and neat, with 2 beds, 2 chairs, a dressing table, a luggage rack that can double up as a seating option, and even a balcony (though there's only so much of a view you can expect in the commercial Hanuman Tekdi). A/C rooms are about twice the cost of the non-A/C rooms mentioned above. Check-out time is 24 hours, and a breakfast buffet at Rs. 50 offers 3 South-Indian options each morning.

Jaya International also has a banquet hall, with a party hall and kitchen in tow, that it offers at about Rs. 200 per head (food included), making it a reasonably attractive proposition for middle classes in an area where the history still lends it a halo.

ADVERTISEMENT
This page was tagged for
jaya internatinal in abids
jaya international mobail nambar
jaya international in mumbai local address and mobile number
jaya international hotel at abids
jaya racks hyderabad
Follow @fullhyderabad
Follow fullhyd.com on
About Hyderabad
The Hyderabad Community
Improve fullhyd.com
More
Our Other Local Guides
Our other sites
© Copyright 1999-2009 LRR Technologies (Hyderabad), Pvt Ltd. All rights reserved. fullhyd, fullhyderabad, Welcome To The Neighbourhood are trademarks of LRR Technologies (Hyderabad) Pvt Ltd. The textual, graphic, audio and audiovisual material in this site is protected by copyright law. You may not copy, distribute, or use this material except as necessary for your personal, non-commercial use. Any trademarks are the properties of their respective owners. More on Hyderabad, India. Jobs in Hyderabad.