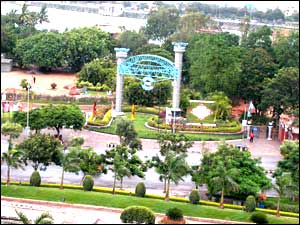 S A Hassan / fullhyd.com
Lumbini Park was one of the first in a series of gardens created to give Hyderabad the image of a "Green City" (and the green waters of Hussain Sagar are not part of this!). For long, the main reason that this attracted good crowds was the fact that the Andhra Pradesh Tourism Development Corporation (APTDC) runs a boating facility from the location. A laser show now adds to the allure of spending an evening with some friends or family by the lakeside in a well-maintained park.

The musical fountain plus laser show offer pleasant entertainment to the visitors. The park also had an amusement games center, which closed down because the authorities did not find it amusing enough. Incidentally, it was called Krazy Chicks 2K, which sounds like a good name for a Dixie Chicks breakaway group.

Two mechanized boats Bhageerathi and Bhagmati offer return trips to the Buddha Statue. At the platform, surround sound speakers play Buddhist Chants. The place is quite peaceful and apt for introspection, even though it is a non-smoking zone. In the evening hours, the bright lights illuminating the statue attract a lot of pests, which try hard to stay away from the humans, but with little success.

The boats offer live dance performances a la Boogie Woogie, with kids barely in their teens shaking a leg to the latest Bollywood numbers. These boats do not provide a stopover at the Buddha Statue, but offer soft drinks and French Fries to make-up for the same. Of course, these come at an extra charge.

ADVERTISEMENT
This page was tagged for
saregamapadhanisa complaints
Sundarayya Park Hyderabad, Telangana
mmts stop for lumbini park
nearest mmts to lumbini park
nearest local station to lumbini park
Follow @fullhyderabad
Follow fullhyd.com on
About Hyderabad
The Hyderabad Community
Improve fullhyd.com
More
Our Other Local Guides
Our other sites
© Copyright 1999-2009 LRR Technologies (Hyderabad), Pvt Ltd. All rights reserved. fullhyd, fullhyderabad, Welcome To The Neighbourhood are trademarks of LRR Technologies (Hyderabad) Pvt Ltd. The textual, graphic, audio and audiovisual material in this site is protected by copyright law. You may not copy, distribute, or use this material except as necessary for your personal, non-commercial use. Any trademarks are the properties of their respective owners. More on Hyderabad, India. Jobs in Hyderabad.