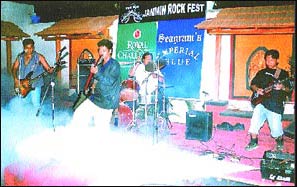 Mithun Verma / fullhyd.com
EDITOR RATING
6.0
Ambience
Service/Courteousness
Value For Money
5.0
5.0
7.0
NA
Safari is like the dead zombie of a horror flick which comes alive whenever there's a sudden noise followed by heavy metal music in the background. Lying dormant as a shady, wayside bar with cheap booze and only 50 people to sit, Safari turns belligerent with energy as it hosts metal fests in the city.

Along with One Flight Down, Safari is the only venue to host live metal bands. This is because of the empty space that Safari has, just beside the bar. The place is already legendary in the little metal history of the city, what with city's first metal band to cut a record, Sledge, choosing to release its album at this venue.

It's only on days like this that anybody ever visits or knows that the place exists. The beer flows like water and the ladies keep pouring in, too. On normal days, you see a sad, uninterested bar just waiting to be dissed at by some sponge who's too unhappy about the ice being too cold.

ADVERTISEMENT
This page was tagged for
safari hyderabad address
safaari address , hyderabad
Lakdi-ka-Pul Pubs / Night Clubs
Safari reviews
email, maps, directions, landmarks
Follow @fullhyderabad
Follow fullhyd.com on
About Hyderabad
The Hyderabad Community
Improve fullhyd.com
More
Our Other Local Guides
Our other sites
© Copyright 1999-2009 LRR Technologies (Hyderabad), Pvt Ltd. All rights reserved. fullhyd, fullhyderabad, Welcome To The Neighbourhood are trademarks of LRR Technologies (Hyderabad) Pvt Ltd. The textual, graphic, audio and audiovisual material in this site is protected by copyright law. You may not copy, distribute, or use this material except as necessary for your personal, non-commercial use. Any trademarks are the properties of their respective owners. More on Hyderabad, India. Jobs in Hyderabad.