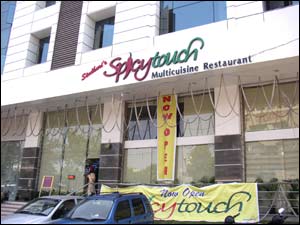 Yes, Spicy Touch scores highest on location - it's bang in the middle of arguably the busiest part of Secunderabad. The results show - it's been crowded right since the first month. The place certainly needed something between Kamat and Mehfill, and the restaurant from Sindhuri Residency bridges the gap.

There's effort to lend character, and both Spicy Touch's floors (there's a mezzanine) look better than they could have been. The tables have glass casings with marbles forming patterns inside, there's a determination to use lighting classily upstairs, the upholstery is noticeable, and there are a couple of group/family enclosures separated by glass and shimmery shades. Yes, you could almost call it even date-friendly. Then you remember the crowds on the ground floor. Like we said, location.

The Food
Spicy Court serves Indian, Chinese and Continental, and hold your yawn, they do an elaborate job of it. When you have 200+ items on the menu, you can offer almost every standard name in the cuisines, and then some.

Appetizers are mostly Chinese, but 22 veg and 23 non-veg feature just about whatever you can ask for, including a few tikkas. There's corn, mushroom, paneer, chicken, mutton, fish, prawns, and all of these on platters too to cut costs. Veg platters cost Rs. 249, non-veg cost Rs. 299, and prawn goes up to Rs. 599.

There are a dozen soups and salads, too, and at Rs. 50 mostly, give an idea of the prices - affordable for a middle class outing. The main course is divided into Chinese, Andhra, North-Indian and Continental, and offers 15-30 options in each (though Continental is relatively less populated). Main dishes usually cost Rs. 100-170 (veg to non-veg), and include popular names like Gobu Manchurian, Nellore Chapala Pulusu, Gongura Mutton, Punjabi Mutton Masala and Spaghetti Napolitiane, but also Chicken 777 (find out), Stir-Fried Chicken In Black Bean Sauce and Penne In Pesto.

Continental stuff is only sauteed and not baked, but there still are steaks and shasliks in the 10-item menu. There are all the standard biryani/pulao rice items (Rs. 50-135), too. Desserts (Rs. 55-95) feature mostly ice creams, with the de rigueur Gulab Jamoon.

The Verdict
There's always been a dispute on whether or not it's a sin to be found around Clock Tower on a Saturday night. Look's like there's a consensus emerging.
Share. Save. Connect.
Tweet
SPICY TOUCH SNAPSHOT
EVENTS AT SPICY TOUCH
There are no events at Spicy Touch scheduled currently.
SPICY TOUCH USER REVIEWS
1 - 2 OF 2 COMMENTS
POSITIVE  |  NEGATIVE |  NEWEST  |  OLDEST  |  MOST HELPFUL  |  LEAST HELPFUL
USER RATING
3.0
2 USERS
Food
Service/Courteousness
Ambience
Value For Money
4.0
4.0
6.0
2.0
Good for date/family - No
Easy parking - Yes
Long waiting - Unsure
rajesh on 2nd Jan 2009, 7:27pm | Permalink
the service is too pathetic.
they dont have even the courtesy to put napkins on the table unless asked.

please dont try the tom yum chicken soup its the worst thing the chef could have made. it was just hot water with some chicken pieces.
RATING
5
sachin_kumar.a on 6th May 2008, 1:00pm | Permalink
Alright the editorial review is quite elaborate and comfortably appreciates this restaurant but coming to ground reality, out of the 90 odd restaurants that i have been to in Hyderabad and Secunderabad this happens to the worst restaurant i have ever been to and i happened to go there trusting the editor to be a gourmet but it turns out t be the contrary follow my un-biased review though elaborate.

What the restaurant lacks:-
1.) multi-cuisine restaurant i don't think so at all when u serve Indian and Chinese and Italian out of which no prawns are served and lot of other items are not served though mentioned on the menu.

2.) The Staff is also the worse i have seen where the one serving me is asking me to serve myself giving me spoon and fork to hand and serving very little coz its too hard for him to bend over to the corner of the table where i am sitting.

3.) The most important crowning jewel for any restaurant is its FOOD, i am sorry to say don't even think of going here to have good food. The Chinese Tom Yum Soup that was served was so bitter and had very hard spring onions, next comes the Fish Amritsari as starter again a big blooper which apparently was written in menu saying its marinated in few sauces and it happens to be a cooked fish which is covered by corn flour and served and when i couldn't find much spice in the restaurant and ordered for Natu Kodi Pulusu it came to the table with so much of spice that i hardly could have aplenty.

What the restaurant has:-
1.) Good furnishings and private compartments for families to sit and have their meal undisturbed.

2.) Silly offer of getting 2 Coke bottles free with every 500 Rs. worth bill made.

Overall, this restaurant is a gonner as long as the restaurant owner realizes its the Chef that matters and not the offers.

ADVERTISEMENT
This page was tagged for
Spice Touch logo restaurant
clock spices name scene
spices item agency hydrabad yellow pages
clock tower spice
S D Road Restaurants / Bars
Follow @fullhyderabad
Follow fullhyd.com on
About Hyderabad
The Hyderabad Community
Improve fullhyd.com
More
Our Other Local Guides
Our other sites
© Copyright 1999-2009 LRR Technologies (Hyderabad), Pvt Ltd. All rights reserved. fullhyd, fullhyderabad, Welcome To The Neighbourhood are trademarks of LRR Technologies (Hyderabad) Pvt Ltd. The textual, graphic, audio and audiovisual material in this site is protected by copyright law. You may not copy, distribute, or use this material except as necessary for your personal, non-commercial use. Any trademarks are the properties of their respective owners. More on Hyderabad, India. Jobs in Hyderabad.