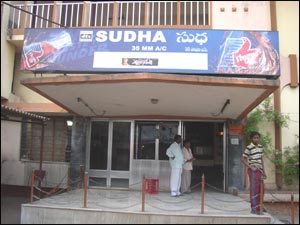 Prasheel Anand / fullhyd.com
EDITOR RATING
5.0
Comfort
Ambience
Cleanliness
Audio/Visual Quality
5.0
5.0
5.0
5.0
Suggestions
Good for date/family
NA
Easy parking
NA
Decent legroom
NA
Working 365 days of the year to screen a mishmash of the latest and the greying (most of the times, in fact) films to avid Telugu movie buffs has been symptomatic of Sudha 70mm since it started. The first movie screened here was the Telugu matinee idol N T Rama Rao starrer "Mundhadugu", which was a massive success. Incidentally, the most recent movie (as we write this in July 2005), was "Narasimhudu", starring NTR's grandson.

The cinema hall apparently hasn't undergone any transformation structurally since it started. The only changes that have happened are technical in nature - the 70mm screen, the DTS audio system, punching machines for the tickets, Georgia tea and coffee machines, four split A/Cs (switched on only when the balcony seats are full), and bigger batteries for attenders' torches.

The area of the theater is not very accomodative - there's barely sufficient space for parking. Sometimes, whenever there is a deluge of vehicles pouring in, you are asked to park your vehicle opposite the hall or adjacent to a nearby cafe and still pay for the parking charges, without being given the ticket.

ADVERTISEMENT
This page was tagged for
sudha theater shah ali banda
sudha thetar hydrabad
sudha cinipolis parking ticket
sudha cinepolis tickets
sudha theatre shalibanda tickets
Follow @fullhyderabad
Follow fullhyd.com on
About Hyderabad
The Hyderabad Community
Improve fullhyd.com
More
Our Other Local Guides
Our other sites
© Copyright 1999-2009 LRR Technologies (Hyderabad), Pvt Ltd. All rights reserved. fullhyd, fullhyderabad, Welcome To The Neighbourhood are trademarks of LRR Technologies (Hyderabad) Pvt Ltd. The textual, graphic, audio and audiovisual material in this site is protected by copyright law. You may not copy, distribute, or use this material except as necessary for your personal, non-commercial use. Any trademarks are the properties of their respective owners. More on Hyderabad, India. Jobs in Hyderabad.