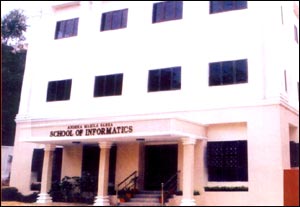 Priyanka Pulla / fullhyd.com
The Andhra Mahila Sabha college buildings are a maze. You pass by a literacy building, a dome shaped seminar hall and old fashioned bar-grilled windows along the corridors before you enter the swank new School Of Informatics. This one stands out with shiny steely letters announcing the name, although another step inside and the deserted look and fresh cement dust all over kills the liveliness a little.

There are holidays aplenty at AMS, but when classes are on, the 75% attendance rule ensures the girls associate blackboards, droning lecturers and writing chairs with college life. Not the canteen, though. The canteen of AMS has such a reputation that most students have not even visited it yet. Also, you have to find the way first.

The games' and sports' interest isn't that brittle, though, with the basketball, tennikoit and volleyball courts, as well as facilities for indoor games, being posed continuous questions about their capacity. Luckily, the PG students are often too busy to take part, and leave them to the undergraduates.

An IT meet Adhyayan is held once a year, and invites speakers from major Hyderabadi corporates, who also come back for placements. These are Satyam, Cardis, Magnaquest, Cognizant etc., and, on an average, pick up 20%-30% of students between themselves. The M. Com. section, for its part, organises frequent seminars on topics like goal-setting, communication skills etc. And placements are much more general with even Doordarshan picking some of the girls here as Telugu newsreaders.

The most striking thing, however, is this - Andhra Mahila Sabha, after all these years of its existence, remains true to its name. The student population is all Andhra, and as a rare occurrence, girls come here from bordering states like Orissa and even more rarely, as a super-freak occurrence, from as far as West-Bengal. AMS therefore is an Andhra culture haven for most girls from Telugu medium backgrounds, who feel completely at home here.

ADVERTISEMENT
This page was tagged for
ANDRA MAhila sabha degree college vidyanagar
Andhra Mahila Sabha PG courses
AMS PG courses hyd
student strength in andra mahila sabha arts and science college
how to go to andhra mahila sabha arts andscience college fo women from warasiguda
Follow @fullhyderabad
Follow fullhyd.com on
About Hyderabad
The Hyderabad Community
Improve fullhyd.com
More
Our Other Local Guides
Our other sites
© Copyright 1999-2009 LRR Technologies (Hyderabad), Pvt Ltd. All rights reserved. fullhyd, fullhyderabad, Welcome To The Neighbourhood are trademarks of LRR Technologies (Hyderabad) Pvt Ltd. The textual, graphic, audio and audiovisual material in this site is protected by copyright law. You may not copy, distribute, or use this material except as necessary for your personal, non-commercial use. Any trademarks are the properties of their respective owners. More on Hyderabad, India. Jobs in Hyderabad.