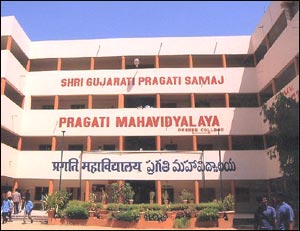 Priyanka Pulla / fullhyd.com
The giant red block letters splotched across the quadranglular building of Pragati Degree College are overbearing reminders every second of where you are. They announce, rather loudly and carelessly, that you are in 'Gujarati Pragati Seva Samiti' 'Pragati Mahavidyalaya' (sic). Painted in red across every floor, they make the building look more like an extra-large election-time poster.

Buzzing all around are chocolatey-looking boys with their unmissable crew cuts, and a sprinkling of girls who seem to be trying to make themselves even more inconspicuous. This college has a less than 10% female population for a nearly 3,000-strong student body.

The boys however, are having a field day. Pragati boasts a fantastic male participation in extra-curricular activities - mainly sports, NCC/NSS, and probably the logical conclusion to both of these: modeling! A number of modeling firms routinely pick students from here, and make sure they are invited to various fashion shows around the city.

Surprisingly, Pragati has no playing courts of its own, but has arrangements with A V College and OU for use of theirs. They also have a division of the Youth Red Cross, opened specifically here given the promising participation levels and lavish resources such as the air-conditioned seminar hall, the auditorium and the Kayon projectors. This 150 strong division of Red Cross conducts many activities such as blood donation and collection of relief funds.

NCC has about 300 students enrolled, and NSS is also riding a wave here. The NCC students of Pragati have attended international meets, and some of the students here have won state and national awards in Powerlifting, Fencing, Cricket, Kho-Kho etc. The secret to this sporty streak in the students is the quotas and fee-concessions offered to sportsmen and women.

The college manages to attract a fair number of big names during its placement season - Nipuna, Infosys, Wipro, GE and ICICI among them. Students often work part-time in their third year as well.

Pragati conducts refresher courses for its faculty members, a move very unlike a privately-run college, and also boasts of being the only non-OU College in Hyderabad whose Principals were awarded professorships twice.

--In the year 1987; I secured 85% and that was not significant enough to land me an opportunity to "educate" myself with a Bachelor's degree in the Sciences or Engineering, in the state of TamilNadu; where I finished my high school and beyond "education".

I was "denied" education in St. Joesph's and Bishop Heber College, TamilNadu as my then short-term goal was to graduate upto MSc. in Physics/Applied Sciences and then apply for a Ph.D in the UK/USA. Providence had other ideas.

I was enrolled into the College with odd times (9-3 PM) for classes and was an out-of-state student (Andhra Pradesh or Telangana and other regions combined is my state of origin as my native language is Telugu) along with a student from Gujarat - Rupen Parikh.

I was well accepted and though the experience was different from expected - we both graduated like many others in 1990 and then it was a major stepping stone to my Master's in Computing.

All I can say now; after having graduated to a more economically developed nation as its citizen - Pragati Jai Ho!


Pros: Quality
Cons: Could be better than current commercial venture

ADVERTISEMENT
This page was tagged for
Pragati Mahavidyalaya Junior
pragati degree college hanumantekdi
pragati college koti
pragathi mahavidyalaya college hanumantekdi koti hyderabad
pragathi mahavidyalaya degree college hanuman tekdi hyderabad
Follow @fullhyderabad
Follow fullhyd.com on
About Hyderabad
The Hyderabad Community
Improve fullhyd.com
More
Our Other Local Guides
Our other sites
© Copyright 1999-2009 LRR Technologies (Hyderabad), Pvt Ltd. All rights reserved. fullhyd, fullhyderabad, Welcome To The Neighbourhood are trademarks of LRR Technologies (Hyderabad) Pvt Ltd. The textual, graphic, audio and audiovisual material in this site is protected by copyright law. You may not copy, distribute, or use this material except as necessary for your personal, non-commercial use. Any trademarks are the properties of their respective owners. More on Hyderabad, India. Jobs in Hyderabad.