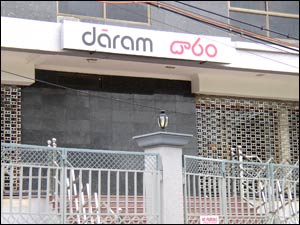 Piya Bahadur / fullhyd.com
It's the kind of place you can't walk into without picking up something - even if it is just a bar of hand-made soap. The first retail outlet of its kind, Daaram is the culmination of an effort of Dastakar Andhra, an NGO that works with the cotton handloom weavers of Andhra Pradesh in a co-operative manner.

While it has been a wholesale supplier to Fabindia and other lesser known boutiques in the city, Daaram is the market exploration exercise that was undertaken by the good people at Dastakar Andhra to probably also show the state-run handloom stores how to build a better mouse trap.

In a time when everything you touch seems to be Made In China, or at least imported from some far-off country, Daaram, which means 'thread' in Telugu, offers you the labors of a cotton weaver from the East Godavari district of Andhra Pradesh. Daaram, with its talk of transparency in the production cycle of indigenous crafts, and attempts to bring the artisan closer to his market, comes as a breath of fresh air in these jaded times of mass production and off-the-boats goods.

At first cut it does look like a Fabindia sibling - and why ever not, insofar as it too deals with the same handloom - natural dyes agenda. Nevertheless, it also has its own distinctive style, in its cuts and prints, recognized by the discerning client.

While the prices are similar, too - you can get a kurta for anywhere between Rs. 275 to Rs. 700 - the store does not just sell clothes and home needs - it pushes an ideology. For, that is what comes through shining when they hand you your purchase in a recycled newspaper bag.

ADVERTISEMENT
This page was tagged for
damu daram haidrabad
DARAM,
Daaram .com
daram online store
www daram begampet video
Follow @fullhyderabad
Follow fullhyd.com on
About Hyderabad
The Hyderabad Community
Improve fullhyd.com
More
Our Other Local Guides
Our other sites
© Copyright 1999-2009 LRR Technologies (Hyderabad), Pvt Ltd. All rights reserved. fullhyd, fullhyderabad, Welcome To The Neighbourhood are trademarks of LRR Technologies (Hyderabad) Pvt Ltd. The textual, graphic, audio and audiovisual material in this site is protected by copyright law. You may not copy, distribute, or use this material except as necessary for your personal, non-commercial use. Any trademarks are the properties of their respective owners. More on Hyderabad, India. Jobs in Hyderabad.