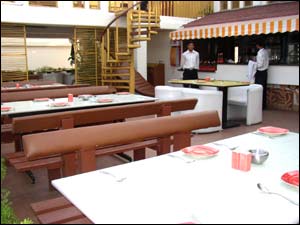 EDITOR RATING
7.5
Food
Service/Courteousness
Ambience
Value For Money
8.0
7.0
8.5
7.5
Suggestions
Good for date/family
NA
Easy parking
NA
Long waiting
NA
The Scene
Celebrations is a multi-restaurant complex if you give it enough benefit of doubt. That's because the menu is the same everywhere, it's just the ambience and staff that changes. Yes, something like Telugu films. Fitting, perhaps, since they are located in the area where most of Tollywood stays.

Horizons, the roof-top barbeque, is perhaps the most popular of the trio of restaurants at Celebrations. With three machans to boot, the terrace dine-in with an encasement where you can see the chefs do their thing with the charcoals and tandoor is more animated than Diaspora or Cascade, and popular for parties with some of the software companies around.

While the floor itself has half a dozen tables, spiraling staircases lead to 3 quasi-machans that accommodate 2-4 tables each, and make the late-evening dining experience a little more quixotic (Horizons is expectedly open only for dinner). Only, the only source of lighting when we visited appeared to be the chefs' encasement - it's nice to sit under the starry skies, but it's optimistic to assume that all your customers can see well in the dark.

The Verdict
Horizons is a fine option for open-air dining, and the view doesn't hurt at all. A good option for those days when your head allows you to take it easy and enjoy the smaller things of life.

ADVERTISEMENT
This page was tagged for
dosakaya 1 Rupee ka phone offer
jubilee hills checkpost bus stop celebrations
harizone job consultancy at hyd jubleehils
guest house near chrian jeevi blood bank jubilee hills
Jubilee Hills Restaurants / Bars
Follow @fullhyderabad
Follow fullhyd.com on
About Hyderabad
The Hyderabad Community
Improve fullhyd.com
More
Our Other Local Guides
Our other sites
© Copyright 1999-2009 LRR Technologies (Hyderabad), Pvt Ltd. All rights reserved. fullhyd, fullhyderabad, Welcome To The Neighbourhood are trademarks of LRR Technologies (Hyderabad) Pvt Ltd. The textual, graphic, audio and audiovisual material in this site is protected by copyright law. You may not copy, distribute, or use this material except as necessary for your personal, non-commercial use. Any trademarks are the properties of their respective owners. More on Hyderabad, India. Jobs in Hyderabad.