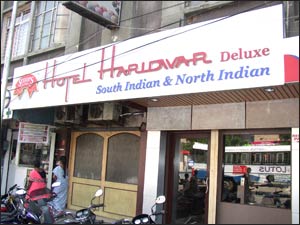 EDITOR RATING
8.0
Food
Service/Courteousness
Ambience
Value For Money
8.5
6.0
5.0
7.5
Suggestions
Good for date/family
NA
Easy parking
NA
Long waiting
NA
The Scene
Strictly functional. Haridwar's restaurant may not inspire you to write a poem, but then it doesn't phase your dignity out either. People come here for the food, not necessarily to get photographed while at it. And they keep coming back. People include marwari and middle class families in the neighbourhood, sales executives, and students of the nearby Koti Women's College. Did we mention students of the nearby Koti Women's College? Yes, there's that glamour bit, too - they hop in mostly for breakfast.

This small air-conditioned place is an upgraded version of an even smaller self-service joint that held forth in the neighbourhood until early-2007, and has about 10 tables. The layout and ambience reflect the location - very '80s Hyderabad, when entering an air-conditioned place was an end in itself, and upholstery translated to luxury. No, this isn't a dÃ©cor place - if it weren't for the food, it would be just another run-of-the-mill eat-out.

The Food
The folks at Haridwar crow about their North-Indian cuisine, and they kid you not.

Originally famous as a breakfast joint, with an array of predominantly South-Indian breakfast fare, the new avatar of Haridwar's eat-out boasts extremely good North-Indian food, too. Reflecting its significant patronage by marwaris, there's a whole section titled paneer dishes in the menu, separate from a North-Indian head.

While a North-Indian thali for Rs. 90 - with 2 curries, dal fry, raitha, curd and 2 rotis + rice (we swapped the rice for another 2 rotis by asking nicely) - would be ideal for a single person, a la carte options are many. For some mysterious reason, the waiter told us not to order the South-Indian thali, actually saying it wasn't good.

There's a vast Chinese spread, too, in this vegetarian dine-in, with even mushroom and babycorn dishes. The tiffins - primarily the South-Indian fare, including such exotic stuff as manchurian dosa and spring roll dosa - are available only 7am-12pm and 3pm-7pm, and make the place quite popular. They recommend Tan Tana Tan dosa, but it was a little too self-announcing for our courage.

They serve half portions here, something we haven't seen anywhere else - that should be a lure in itself for those wanting to try out a variety. Plus, Jain food, too. And a whole ice cream parlor attached (branded Scoops) offers an array of sundaes, priced Rs. 20 - Rs. 65.

ADVERTISEMENT
This page was tagged for
haridwar idly ranigunj
how to go to haridwar hotel esamia bazar hyderabad telengana
location of haridwar hotel hyderabad
hariduaar ka pul seen
haridwar idly address
Follow @fullhyderabad
Follow fullhyd.com on
About Hyderabad
The Hyderabad Community
Improve fullhyd.com
More
Our Other Local Guides
Our other sites
© Copyright 1999-2009 LRR Technologies (Hyderabad), Pvt Ltd. All rights reserved. fullhyd, fullhyderabad, Welcome To The Neighbourhood are trademarks of LRR Technologies (Hyderabad) Pvt Ltd. The textual, graphic, audio and audiovisual material in this site is protected by copyright law. You may not copy, distribute, or use this material except as necessary for your personal, non-commercial use. Any trademarks are the properties of their respective owners. More on Hyderabad, India. Jobs in Hyderabad.