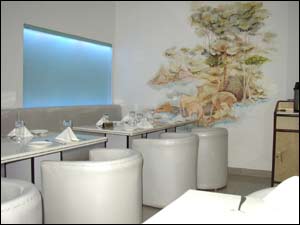 EDITOR RATING
7.5
Food
Service/Courteousness
Ambience
Value For Money
8.0
7.0
7.5
7.5
Suggestions
Good for date/family
NA
Easy parking
NA
Long waiting
NA
The Scene
Celebrations is a multi-restaurant complex if you give it enough benefit of doubt. That's because the menu is the same everywhere, it's just the ambience and staff that changes. Yes, something like Telugu films. Fitting, perhaps, since they are located in the area where most of Tollywood stays.

Diaspora reminds you of Touch, in its make-up and decorative lighting - there are blocks of light in wall panels in a dark place, giving out the feel more of a pub or bar. Unfortunately, thanks to the rather small floor area, the first impression is that of a cramped and dingy place, almost seedy. The seating is plush, but it takes up too much space in trying to accommodate about 50 when the area is best for just about 70% of that. Perhaps as a result, the place is counter-productively more deserted, with most of the crowd preferring to go upstairs to the rooftop Horizon.

There's also an aura of inactivity about Disapora, but then negativities feed off each other. And the menu is dog-eared and unkempt, a sin in a place where the average meal for a couple is Rs. 400-500.

The Verdict
Diaspora can appear more a place for a bunch of guys rather than a date or a family outing, thanks to the rather messed up look and feel. Thankfully, there's Horizons on the terrace if you feel the same.

ADVERTISEMENT
This page was tagged for
dosakaya aloo Karbala mobile
jubilee hills checkpost bus stop celebrations
diaspora celebrations pics
vankaya krbala
Diaspora - Celebrations Hyderabad
Follow @fullhyderabad
Follow fullhyd.com on
About Hyderabad
The Hyderabad Community
Improve fullhyd.com
More
Our Other Local Guides
Our other sites
© Copyright 1999-2009 LRR Technologies (Hyderabad), Pvt Ltd. All rights reserved. fullhyd, fullhyderabad, Welcome To The Neighbourhood are trademarks of LRR Technologies (Hyderabad) Pvt Ltd. The textual, graphic, audio and audiovisual material in this site is protected by copyright law. You may not copy, distribute, or use this material except as necessary for your personal, non-commercial use. Any trademarks are the properties of their respective owners. More on Hyderabad, India. Jobs in Hyderabad.