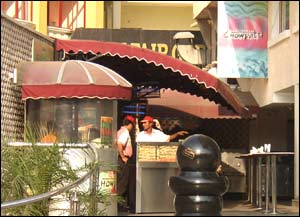 EDITOR RATING
8.0
Food
Service/Courteousness
Ambience
Value For Money
8.0
NA
7.0
7.5
Suggestions
Good for date/family
NA
Easy parking
NA
Long waiting
NA
The Scene
For the uninitiated, Chowpatti is a bustling public beach adjoining Marine Drive in the Girgaum area of Mumbai, with several chaat (bhelpuri, pani puri, dahi puri etc.) vendors, and plenty of vibrancy from strolling crowds out for some cheap and well-deserved chaat and timepass after a hard day's work (and before, and during, it). Chowpatti at Ohri's Banjara glosses over all of that, and uses 2 words instead - "mineral water".

Yes, arguably the only cooked and tasty thing in the world you can get for under Rs. 5, chaat goes upmarket at Chowpatti, usually costing 10 times as much, by hitting the bandi where you always had it below the belt - going hygienic. It's a moot point if it's ethical to have chaat in hygienic surroundings, but several people throw karmic caution to the winds and happily gorge themselves in the open air in this small passageway around Havmor.

The place opens only at 1pm, but quickly makes up by attending swiftly to both dedicated patrons and some spillover crowd from Havmor that start surging at ...oh, any hour. You can sit, you can stand, or you can just buy and escape before anyone finds out.

The Food
Since Chowpatti has more space than a typical pani puri bandi, it offers more, too. So there is a whole array of stuff that can make you stealthily forget what you came for in the first place, and clap your hands in glee at the vivacious spread.

ADVERTISEMENT
This page was tagged for
ladkikamootmarna
ohris banj
eddo lights hyderabad banjara hills
ohris chowpatti numbers
manufacturer+of+low+cost+pani+poori+bandi+in+hyderabad
Follow @fullhyderabad
Follow fullhyd.com on
About Hyderabad
The Hyderabad Community
Improve fullhyd.com
More
Our Other Local Guides
Our other sites
© Copyright 1999-2009 LRR Technologies (Hyderabad), Pvt Ltd. All rights reserved. fullhyd, fullhyderabad, Welcome To The Neighbourhood are trademarks of LRR Technologies (Hyderabad) Pvt Ltd. The textual, graphic, audio and audiovisual material in this site is protected by copyright law. You may not copy, distribute, or use this material except as necessary for your personal, non-commercial use. Any trademarks are the properties of their respective owners. More on Hyderabad, India. Jobs in Hyderabad.