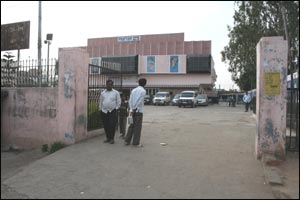 And thus began the ruin of their friendship, because Classy-Backbencher just couldn't stand Dumb-Frontbencher's level of judgement.

Considering a bad introduction done, let's move back to Pratap Cinema. Without the close second look, you could easily mistake it for another of the Golconda ruins. Big, shady and absolutely empty, the theater situated in the interiors of Hyderabad screens movies that are either bad or worse. There was a flutter when a few posters of Kaante - a movie cursed in its own way - were put up on their gates. Apart from low-budget missable flicks, Pratap boasts of nothing much to shine about.

With a management that's changed twice in the past three years, the signs are pretty evident. Anyways, here's the regular round-up. The parking lot is B-grade. The loo is B-grade. The audience is those who watch B-graders. Take an average of the above statistics and you get a big C, as in C-U-later!
Share. Save. Connect.
Tweet
PRATAP CINEMA (LANGER HOUSE) SNAPSHOT
MOVIES AT PRATAP CINEMA (LANGER HOUSE)
There are no movies at Pratap Cinema (Langer House) scheduled currently.
PRATAP CINEMA (LANGER HOUSE) USER REVIEWS
1 - 9 OF 9 COMMENTS
POSITIVE  |  NEGATIVE |  NEWEST  |  OLDEST  |  MOST HELPFUL  |  LEAST HELPFUL
USER RATING
4.8
4 USERS
Comfort
Ambience
Cleanliness
Audio/Visual Quality
5.7
5.3
5.3
9.0
Good for date/family - Yes
Easy parking - Unsure
Decent legroom - Unsure
Cinrphile on 5th Oct 2019, 4:41pm | Permalink
What are ticket cost? 30, 60, 100?
Ali Raza on 15th May 2016, 3:34pm | Permalink
One the Best theater in the hyderabad for familys nice sound and picture clarity and full of A/C
dinesh on 17th Apr 2015, 8:24pm | Permalink
wrost theater in the city ticket chitters.full black ticket seller in the theater
shekar on 13th Jan 2014, 10:03am | Permalink
My comments

http://www.getaheadofthegames.com/best-pool-games
Rammohan on 18th Dec 2013, 1:40pm | Permalink
It is a nice theatre for family and youth to enjoy where I started movies to see here only
Swathi on 24th Aug 2013, 1:42pm | Permalink
Pratap theater is one of very nice theaters in hyderabad.
CH.VEERRAJU on 27th Jun 2013, 2:07pm | Permalink
WASTE THEATRE IN HYDERABA D I NEVER EVER FOUNDALL BLOCK TICKETS ONLY IS IT NECESSARY TO ASK COMMENT FOR THIS THEATRE WASTE OF TIME BUT WHAT TO DO
santhosh-langerhouse on 10th Jan 2013, 9:53am | Permalink
prathap..its not a theatre..no mainatinace..no sound quality..before interval 15 min AC..AFTER interval 15 min AC..digital sound as follows by AC..AND staff..they are not staff local mass people...tickets...only block tickets will available..manger..i dnt knw why hall owner selecte him as manager...no proper dressing..he doesnt look like as manager..road side begger


Pros: no pros
Cons: worst cinema hall
RATING
1
vasueicon on 26th Apr 2012, 4:36am | Permalink
Please put a date on Editorial Reviews..as people want to know when the rats followed patrons inside the theater contrast usher welcomes to the experience of A/c with Nice scent.

ADVERTISEMENT
This page was tagged for
alankar pratap theatre
pratap theatre tickets
alankar theatre suncity
alankar(prathap theatre) langer house review
langar house move ticket
Follow @fullhyderabad
Follow fullhyd.com on
About Hyderabad
The Hyderabad Community
Improve fullhyd.com
More
Our Other Local Guides
Our other sites
© Copyright 1999-2009 LRR Technologies (Hyderabad), Pvt Ltd. All rights reserved. fullhyd, fullhyderabad, Welcome To The Neighbourhood are trademarks of LRR Technologies (Hyderabad) Pvt Ltd. The textual, graphic, audio and audiovisual material in this site is protected by copyright law. You may not copy, distribute, or use this material except as necessary for your personal, non-commercial use. Any trademarks are the properties of their respective owners. More on Hyderabad, India. Jobs in Hyderabad.