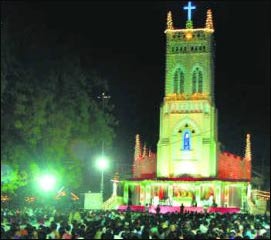 Dolly Dinesh N / fullhyd.com
If you were to compare it with the Nawabi charm of the old city of Hyderabad and its monuments with the Islamic influence, Secunderabad's fair share of architecture and landmarks seems more Victorian. The raison d'etre could perhaps be the British Army being stationed on this part of the twin cities. From its large number of convent schools, churches and multi-ethnic influences to the deluge of English movies regularly screened at the popular Sangeet, the younger of the twins by 200 years decidedly bears the hallmarks of anglicization.

Take a stroll down the busy Sarojini Devi Road, and tucked within its stretch you'll find another of these - the 150-year-old St. Mary's Church. Reminiscent of an old Irish chapel, it has been declared a heritage site. Formerly known as St Mary's Cathedral, this church was the seat and residence of the Vicar Apostolic of Hyderabad. Here's a little bit of history.

Father Daniel Murphy had come to India with Bishop Carew in 1839, and was given the mission of Hyderabad and Secunderabad. Most practising Christians will know that there are 4 main categories of Christian places of worship - chapel, church, basilica and cathedral. The cathedral is normally a much larger place of worship than a church, and is run by a bishop. In 1840, Bishop Murphy began to build a cathedral in Secunderabad, which was completed in 1850.

In 1864, owing to failing health, Bishop Murphy was forced to leave India. The vicariate was then entrusted to the Milan Seminary of Foreign Missions. Father Giovanni Domenico Barbero became Vicar Apostolic, and was consecrated Bishop of Doliche, at Rome, 3 April, 1870. He procured some Sisters of St. Anne from Turin, and in 1871 established them at Secunderabad where they opened an orphanage and a girls' school. Popular as the St. Ann's school, it remains the most prominent landmark adjoining the church.

The exterior of the church is clearly Gothic in its architecture. Walk around the church and its edifice, and the deserted unkempt area behind clearly shows signs of being a witness of a bygone era. Sure enough, walk up the steps, and a board informs you that the foundation of the Church was laid, pretty ironically, on 15th August 1847.

The hallowed interior has two altars of Mother Mary and St. Patrick alongside St. Jesus. The church is not as ornate or elaborate as you'd expect from the regular decor of most period places of worship. Perhaps it was decided prayers play more important a role here than beautification. There is a series of stained glasses at the ground level of the church which clearly needs some repair work, but its wooden pews make you want to rest and ponder awhile before taking leave.

There is a small crowd of devotees scattered around on weekdays, lost in pensive veneration. The hush inside, a mark of respect for the spiritual presence, is calming. Right next to the church, within the same premises, is a small prayer room called the St Jude's Shrine, where people come to meditate.

The church opens at the wee hour of 4:30am, and closes by 12:00pm, It again at opens at 3:00pm to close at 8:30 pm. Masses are held in Telugu, Tamil and English. On Sundays there are 7 masses held during the day. The church wakes up from its serenity when there is a marriage or fest happening, which are mainly Christmas and Easter, drawing crowds from both the twin cities.

So the next time you feel the need to imbibe the spirit of Thanksgiving or simply be part of a religious revelry, drop by at the St. Mary's Church and witness its moments of gaiety combined with its Eucharist practice of sobriety. Ave Maria!
Share. Save. Connect.
Tweet
ST MARY'S CHURCH (TOURIST... SNAPSHOT
ST MARY'S CHURCH (TOURIST SPOT) SNAPSHOT
EVENTS AT ST MARY'S CHURCH (TOURIST...
EVENTS AT ST MARY'S CHURCH (TOURIST SPOT)
There are no events at St Mary's Church (Tourist Spot) scheduled currently.
ST MARY'S CHURCH (TOURIST... USER REVIEWS
ST MARY'S CHURCH (TOURIST SPOT) USER REVIEWS
1 - 1 OF 1 COMMENTS
POSITIVE  |  NEGATIVE |  NEWEST  |  OLDEST  |  MOST HELPFUL  |  LEAST HELPFUL
a.anthony on 22nd Oct 2013, 7:49pm | Permalink
We would like to bring to your kind notice few lines and will appreciate if you can go justice as a parish priest of your Basilica. Our youth leader Mr. Marshall is using his post for his pleasure. He goes to the house and informs him that parish priest is calling to do some work in the parish office and take his daughter and goes with her outside and now-a-days started enjoying with her like kissing, romancing in the church premises and so on. Infract he had told that her birthday is going to be celebrated in parish hall and took her out and left her in the house at 11.30 pm, his is enjoying all types of things in church premises if you have any kind of drought you can check they mobile messages last evenings also. This is going beyond limits which I feel you are the right person to control. So we youth of our church request you to take immediate action and sack in form the post as he had misused his post. And if no action is been taken within 15 days we will send a letter to arch bishop and cc to all parishes and we won’t back to inform media
LEAVE A COMMENT
fullhyd.com has 700,000+ monthly visits. Tell Hyderabad what you feel about St Mary's Church (Tourist Spot)!
RELATED LISTINGS
Indira Park
Lower Tank Bund, Opposite To Ramakrishna Math, Nr Bandamaisamma Nagar, Lower Tankbund (2.5km)
Cenetary Methodist Church
5-8-330, Chapel Road, Abids (0.5km)
Charminar
Charminar (3.5km)
Shilparamam Arts Crafts & Cultural Society
64M, Silparamam, Madhapur (9.9km)
Chanchalguda Jail
Akbarbagh, New Malakpet, Chanchalguda (3.7km)
more locations
Rajiv Gandhi International Airport, Shamshabad
Shamshabad
Purani Haveli
HEH The Nizam's Museum, Afzalgunj (3.6km)
Osmania University College Of Arts & Social Sciences (Tourist Spot)
Osmania University Campus, Osmania University (5.9km)
Lad Bazaar
To The Left Of Charminar, Charminar (3.4km)
Moulali Dargah (Moula Ali Dargah)
Moula Ali (11.9km)
Begumpet Airport (Old)
Begumpet (5.7km)
Shameerpet Lake
22 Kms From Secunderabad Railway Station, Shameerpet
Secunderabad Railway Station
Plot No. 10, Bhoiguda Side, S D Road (5.7km)
Darling Cave
Muraharipalli Village, Near Genome Valley, Medchal Mandal, Kompally
Rail Nilayam Auditorium
Rail Nilayam (6.6km)
Cherlapally Central Jail / Cherlapalli Jail
Cherlapally
Hitech City (Cyber Towers)
Madhapur (9.7km)
Surendrapuri - Kunda Satyanarayana Kaladhamam
60 Kms From Hyderabad Near Yadagirigutta, Yadagirigutta
Mruguvani National Park
Chilkur, Moinabad Mandal
Khaja Guda Hills
Khaja Guda, Serlingampally
collapse
RELATED CATEGORIES
Museums
Landmarks / Tourist Spots
Gardens & Parks
SEARCH YELLOW PAGES
Dissatisfied with the results? Report a problem or error, or add a listing.
ADVERTISEMENT
SHOUTBOX!
{{todo.name}}
{{todo.date}}
[
ip{{todo.ip}}
]
{{ todo.summary }}... expand »
{{ todo.text }} « collapse
First  |  Prev  |   1   2  3  {{current_page-1}}  {{current_page}}  {{current_page+1}}  {{last_page-2}}  {{last_page-1}}  {{last_page}}   |  Next  |  Last
{{todos[0].name}}

ADVERTISEMENT
This page was tagged for
st.mary's church secunderabad phone of the parish priestd
church altar cloths for sale in secunderabad or hyderabad city
st marry church tourist spot
st mary's basilica SECUNDERABAD parish priest telephone
sen marys church s.d.road
Follow @fullhyderabad
Follow fullhyd.com on
About Hyderabad
The Hyderabad Community
Improve fullhyd.com
More
Our Other Local Guides
Our other sites
© Copyright 1999-2009 LRR Technologies (Hyderabad), Pvt Ltd. All rights reserved. fullhyd, fullhyderabad, Welcome To The Neighbourhood are trademarks of LRR Technologies (Hyderabad) Pvt Ltd. The textual, graphic, audio and audiovisual material in this site is protected by copyright law. You may not copy, distribute, or use this material except as necessary for your personal, non-commercial use. Any trademarks are the properties of their respective owners. More on Hyderabad, India. Jobs in Hyderabad.