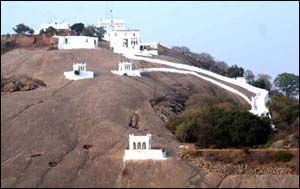 Piya Bahadur / fullhyd.com
The approach to Moula Ali Dargah serves to remind you yet again of the mofussil corner in Hyderabad's large heart - the one that refuses to turn all concrete and glass, with broad roads and convenient shopping, the corner that marches to the beats of its own ancient drummers. For, deep along the city where the roads eventually narrow down, where neighbors can look in and wonder what's cooking, in ways more than one, lies the monument of Moula Ali built more than 450 years ago.

If you are lucky, you will hear the call of the Muezzin beckoning the faithful to prayer ring out, as you begin your ascent. The perfunctionary etchings of contemporary advertising enthusiasts and stray lovers on the rockfaces do not distract you from the climb. For, you are wont to discard these as short-lived passions on these abiding Hyderabadi rockfaces.

Soon enough, the goading gentle breeze and the promise of a view to remember, bring you to the first natural stop in the climb. Other visitors stop here as well exchanging shy smiles in the peaceful environs so high above the city. The city itself is reduced to a painting along the blue horizon. Nevertheless, there is a niggling thought somewhere.

Another 250 steps bring you to the doors of the Dargah, where you will be required to leave your footwear, for you enter into realms which have been held holy for many centuries now. As it often happens when Nature and religion conspire, the victim is left with no choice but to accede.

So is it here, at this elevation above the bustling city and its cares, caressed by a soothing breeze and encouraged by a benevolent mujabir, that you slip into a mode where watching the eagles below lazily circling on wind eddys reminds you at once of both the transience and permanence of human existence.

A walk around the main shrine, the handprint of Moula Ali on a rock, the locks left by hopeful believers in lieu of their implorations to a generous god, and the namaz hall itself reinforce the mood of piety.

However, it's on the walk down that the niggling at the back of your head is crystallised. The ancient whitewashed structures, the sparkling white bannisters, buildings and stairs jerk you out of your reverie. What happened to the original material which was used to build the monument four centuries ago?

And with it comes the melancholy, when you can see in your mind's eye the original stones, mined from the Deccan plateau, standing in harmonious inceptive dignity where they were placed so many years ago. Yet, you calmly reason, the shrine was built for the faithful through the ages and not really for preservation in pristine glory for all posterity. Presently the niggling dissolves, and you go back to watching the butterflies chase each other under an aging neem tree.

ADVERTISEMENT
This page was tagged for
moulali baba dargah khadim contact number
molali images
how to go to kadtha village from moulaali by vehicle
Moulali Moula Ali
dargah with name
Follow @fullhyderabad
Follow fullhyd.com on
About Hyderabad
The Hyderabad Community
Improve fullhyd.com
More
Our Other Local Guides
Our other sites
© Copyright 1999-2009 LRR Technologies (Hyderabad), Pvt Ltd. All rights reserved. fullhyd, fullhyderabad, Welcome To The Neighbourhood are trademarks of LRR Technologies (Hyderabad) Pvt Ltd. The textual, graphic, audio and audiovisual material in this site is protected by copyright law. You may not copy, distribute, or use this material except as necessary for your personal, non-commercial use. Any trademarks are the properties of their respective owners. More on Hyderabad, India. Jobs in Hyderabad.