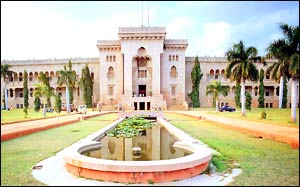 Deepa Menon / fullhyd.com
Frozen music, Goethe called it. And if one does accept this striking definition of architecture, it's possible to say that the Osmania Arts College is a song of voluptuous diversity, a triumph of travel. After all, it took a trip around the globe to put together one of the country's largest universities.

Finding the pink granite was not the problem, it was quarried from right on the campus (all sorts of things turn up on a land of 1,500 acres). But it was a Belgian architect, Monsieur Jasper, who gave it shape. Gothic, Moorish, Arabic and Hindu styles were liberally borrowed for this splendid edifice that served as the entire university for a while after it first opened.

Give you an example of the potpourri of styles incorporated within the OU Arts College: the grand arch that greets you is built in Persian Pishtaq form, the columns on the first floor are reminiscent of those in the caves of Ajanta and Ellora, the arcades and parapets are ancient Moorish, and the galleries are replete with ornamental pillars built in Hindu tradition. A harmony of histories is apparent everywhere you gaze.

ADVERTISEMENT
This page was tagged for
Arts College
Arts College Osmania University Hyderabad, Telangana
Ou arts college in hyderabad
arts and science college osmania university
Arts College Osmania University Hyderabad, Telangana 500007
Follow @fullhyderabad
Follow fullhyd.com on
About Hyderabad
The Hyderabad Community
Improve fullhyd.com
More
Our Other Local Guides
Our other sites
© Copyright 1999-2009 LRR Technologies (Hyderabad), Pvt Ltd. All rights reserved. fullhyd, fullhyderabad, Welcome To The Neighbourhood are trademarks of LRR Technologies (Hyderabad) Pvt Ltd. The textual, graphic, audio and audiovisual material in this site is protected by copyright law. You may not copy, distribute, or use this material except as necessary for your personal, non-commercial use. Any trademarks are the properties of their respective owners. More on Hyderabad, India. Jobs in Hyderabad.