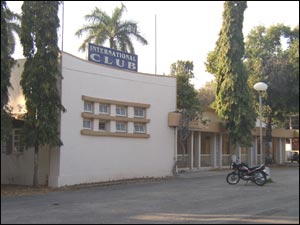 Ghazala Rizvi / fullhyd.com
BHEL International Club is a lot like a school building whose patrons have taken a liking to other, less erudite pursuits. It is also a lot less. Filled with small cubicles with weather-beaten doors, the club won't rock your entertainment world, but the fact that the place still provides a recluse to the PSU employees is pleasurable in itself.

Exclusively open for BHEL employees, it offers some indoor games like table tennis, carroms, bridge and snooker, and outdoor sports like basketball, cricket and lawn tennis. The club also has a gym, recently fitted with a few machines like cycles and a treadmill, and it remains open between 6am and 12pm in the mornings, and between 6pm and 9pm in the evenings.

There is a very active library with a librarian well versed in Telugu, English and Hindi literature. The library can be used between 10am and 12pm in the morning, and between 6pm and 9pm in the evenings. On Saturdays, there is a film screening.

The BHEL International Club also has an indoor badminton court, which forms part of district level selections and games. The lawns, which form the inner core of this rectangular building, are well-spruced and ready to be leased out to members on the payment of Rs. 5,000. The hall, which previously housed the Ambrosia restaurant, is also available on a rent of Rs. 2,000.

There is also a swimming pool, and a 1-hour dip in it costs Rs. 100 to members. The students are given a concessional bargain at Rs. 20 per month for the summer. Attached to the club are a tailoring shop and a beauty parlor, which are open to the general public between 10am and 6pm.

The club does not qualify as a retreat or even warrant a loyal traffic. Everything from the dilapidating structure to the rusting equipment strongly reeks of 56 years of over-exploitation of government funds.
Share. Save. Connect.
Tweet
BHEL INTERNATIONAL CLUB SNAPSHOT
EVENTS AT BHEL INTERNATIONAL CLUB
There are no events at BHEL International Club scheduled currently.
BHEL INTERNATIONAL CLUB USER REVIEWS
1 - 3 OF 3 COMMENTS
POSITIVE  |  NEGATIVE |  NEWEST  |  OLDEST  |  MOST HELPFUL  |  LEAST HELPFUL
USER RATING
8.0
1 USER
Service/Courteousness
Ambience
Value For Money
NA
NA
NA
sunita on 1st Jul 2017, 11:51am | Permalink
hello sir,

i am not BHEL employee, but could you please consider to me to join in your international club???
i am very much excited to join swimming and other activities

This is similar to Community Centre(CC), BHEL. Only difference is the membership policy.

Movies screened are free for all BHEL employees. But, in CC it's free for everyone.

ADVERTISEMENT
This page was tagged for
Haridwar badminton club
badminton club in haridwar
BHEL swimming pool Hyderabad, Telangana 502032
swimming classes in bhel haridwar
bhel swimming pool membership
Follow @fullhyderabad
Follow fullhyd.com on
About Hyderabad
The Hyderabad Community
Improve fullhyd.com
More
Our Other Local Guides
Our other sites
© Copyright 1999-2009 LRR Technologies (Hyderabad), Pvt Ltd. All rights reserved. fullhyd, fullhyderabad, Welcome To The Neighbourhood are trademarks of LRR Technologies (Hyderabad) Pvt Ltd. The textual, graphic, audio and audiovisual material in this site is protected by copyright law. You may not copy, distribute, or use this material except as necessary for your personal, non-commercial use. Any trademarks are the properties of their respective owners. More on Hyderabad, India. Jobs in Hyderabad.