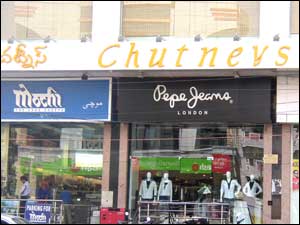 EDITOR RATING
9.0
Food
Service/Courteousness
Ambience
Value For Money
9.0
7.5
7.5
9.0
Suggestions
Good for date/family
NA
Easy parking
NA
Long waiting
NA
The Scene
There was nothing else that could be done at Banjara Hills anymore - they'd risen as high as they could, literally - and Chutneys finally did the logical thing in 2008, something that any IIM dropout would've suggested years back. It opened a new outlet.

And judging by the crowds, it's good news for a lot of people. The Chutneys at Himayatnagar, a 100-seater, sees almost the same crowds as its mother outlet at Nagarjuna Circle. It feels almost the same too - same shade of wood, same crowd profile. You find plenty of middle and upper middle class Telugu families, and the executive class. Only, the songs are missing at the time that we write this (Feb 2008). C'mon, if you can do it at Banjara Hills, you can do it at Himayatnagar.

The Food
In case you didn't already know, it's the South-Indian - Andhra, actually - fare that makes people beat down the doors here. The Steamed Dosa, the menu proudly proclaims, is Chiranjeevi's favorite. You can question the logic - why should you like a dosa just because Chiranjeevi likes it - but it's hard to be logical about anything when you actually dig your fangs into the thing.

16 kinds of dosas, all the other standard South-Indian breakfast fare including upma, pesarettu, idli and puri, and delicacies like Babai Idli sinfully topped with butter, are embellished by 4 chutneys (2 coconut and 2 ginger) that are the soul of Chutneys' fare. Seriously, how many restaurants actually serve coconut chutney anymore?

Chutneys is actually multi-cuisine - there are entire North-Indian and Chinese menus here, in an impressive roster of 150 dishes. However, the signature preparations are all South-Indian - you find only the standard names anywhere else.

The restaurant is not exactly economy, but most people seem to think it's worth it. But if you think Rs. 29 is too much to pay for a plate of idlis, then allow Chutney's to convince you otherwise. They put up a strong case.

The Verdict
Chutneys can be addictive, and the only problem then becomes the distance - coconut chutneys can hardly hurt. In fact, like Harry Bellafonte sang, "Coconut water contains iron / Makes you roar like a lion." Find out if that is true.


Pros: time pass
Cons: it will kill ur time .. if we go there

ADVERTISEMENT
This page was tagged for
veg hotels near himayatnagar
chutneys himayat nagar restaurant phone number
chetni restorant hydrabade
chutneys himyatnagae address
chutneys in hymith nagar
Follow @fullhyderabad
Follow fullhyd.com on
About Hyderabad
The Hyderabad Community
Improve fullhyd.com
More
Our Other Local Guides
Our other sites
© Copyright 1999-2009 LRR Technologies (Hyderabad), Pvt Ltd. All rights reserved. fullhyd, fullhyderabad, Welcome To The Neighbourhood are trademarks of LRR Technologies (Hyderabad) Pvt Ltd. The textual, graphic, audio and audiovisual material in this site is protected by copyright law. You may not copy, distribute, or use this material except as necessary for your personal, non-commercial use. Any trademarks are the properties of their respective owners. More on Hyderabad, India. Jobs in Hyderabad.