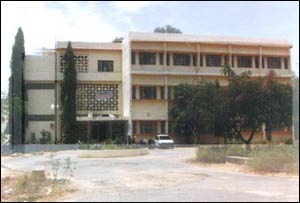 Deepa Menon, with inputs from Veena Vudatala and A / fullhyd.com
Students who earn a seat at this college walk around bathed in a sweet satisfied glow. At least for the first month or two. It's understandable, since the competition to get in here is not just fierce, it's rabid. Especially given the number of students who appear for the EAMCET exams every year. They say if you strung all of them end-to-end along the equator, you'd come up with a really interesting statistic.

Jawaharlal Nehru, however, wasn't thinking about the EAMCET, the equator or students lying end-to-end, when he came up with the idea for the country's first technological institute. India's nascent Industrial Revolution had to be fuelled with the best brains, and JNTU was just the place to provide the necessary grey stuff.

One of the premier institutes for engineering, JNTU, at first glance, is an impressive sight. Although the engineering buildings are as old as the college, there have been some age-defying cosmetic surgeries performed on them. Quite effective, on the whole.

Life in college starts comfortably around 10:30am, as per the convenience of the students (it's officially supposed to start around 10, but bending rules is a proud tradition here). The campus atmosphere is very laid-back, and you'll only spot some excitement where there is a particularly boisterous group of friends.

The level of competition is excellent academically, and JNTU hosts some very successful technical festivals. However, there isn't as much enthusiasm when it comes to cultural or social activities. It's only at their annual fest Spandana, that any real activity happens.

According to the students, one of the biggest drawbacks of the college is that it functions like a government office. This, of course, is an oxymoron. But JNTU's track record and brand equity make everything worthwhile for most people who study here.

With an A+ accreditation from NAAC, JNTU's yearly recruitment drive has companies like HAL and TCS, among others, dropping in to snap up the toppers. The college also does wonders for your rsum if you are planning to apply to universities abroad. The civil engineering department, in particular, is very dynamic, and assures its students plenty of hands-on exposure to live projects outside the college.

A UGC cell on campus conducts workshops and seminars, and the Entrepreneurship Development Cell is also quite active. Plus, they have a unique alumni program that matches mentor and protg according to specific requirements. This is based on the principle that, and we quote directly from the SAMP guidelines (Student Alumni Mentorship Program), "Every student has varying needs according to his or her individual ethnic background, sexual orientation and academic or professional interests."

ADVERTISEMENT
This page was tagged for
Sexvidoes
spandana Degree college vanasthalipuram
what is the street address for JNTU University in Hyderabad
jntu.ac.in emcent convienie emails
JNTUH College of Engineering, Hyderabad
Follow @fullhyderabad
Follow fullhyd.com on
About Hyderabad
The Hyderabad Community
Improve fullhyd.com
More
Our Other Local Guides
Our other sites
© Copyright 1999-2009 LRR Technologies (Hyderabad), Pvt Ltd. All rights reserved. fullhyd, fullhyderabad, Welcome To The Neighbourhood are trademarks of LRR Technologies (Hyderabad) Pvt Ltd. The textual, graphic, audio and audiovisual material in this site is protected by copyright law. You may not copy, distribute, or use this material except as necessary for your personal, non-commercial use. Any trademarks are the properties of their respective owners. More on Hyderabad, India. Jobs in Hyderabad.