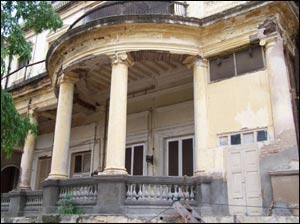 Deepa Menon / fullhyd.com
Jimmy Kirkpatrick ko gussa kyon aata hai? You'd think the guy would be happy. He's been reunited with his gorgeous wife and two children. His story's been told, and even stayed on the best-seller's list for a goodly while. What more could a dead man want? A home, you say? Ah, we see what you mean. No wonder, he's miffed.

You see, to James Achilles Kirkpatrick, British ambassador in 18th century Nizam's court whose love-story inspired William Dalrymple's White Mughals, home meant the Residency. Not the Taj, my dear ignoramus, the British Residency. This is where Kirkpatrick and his lady love, Khair-un-Nissa, spent many idyllic moments. This is where their children were born. And this is where he built her a home. A home that looks a lot like the White House might look if it spent two centuries baking under the Hyderabad sun, and breathing traffic fumes from the choked by-lanes of Koti.

Now, looking on as young girls bustle about attending classes in the ancient elephant stables of the Residency, you can see why the Osmania University College For Women needs help. One of the 100 endangered heritage sites named by the World Monuments Fund, this OU College is in for major restorative surgery to prevent it from crumbling into oblivion.

ADVERTISEMENT
This page was tagged for
british residency review
hyderabad british residency address
ou womens college koti
Photo of Residency Complex (Women’s College, Koti)
material used for koti residecy
Follow @fullhyderabad
Follow fullhyd.com on
About Hyderabad
The Hyderabad Community
Improve fullhyd.com
More
Our Other Local Guides
Our other sites
© Copyright 1999-2009 LRR Technologies (Hyderabad), Pvt Ltd. All rights reserved. fullhyd, fullhyderabad, Welcome To The Neighbourhood are trademarks of LRR Technologies (Hyderabad) Pvt Ltd. The textual, graphic, audio and audiovisual material in this site is protected by copyright law. You may not copy, distribute, or use this material except as necessary for your personal, non-commercial use. Any trademarks are the properties of their respective owners. More on Hyderabad, India. Jobs in Hyderabad.