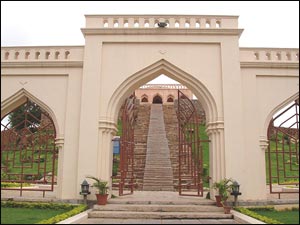 C Venkatesh / fullhyd.com
A baradari is a hall with 12 arches, and Taramati was one of the consorts of a former ruler of Hyderabad. So what's the "Taramati Baradari"?

Tales about Fort Golconda can, and do, fill volumes. Some are undoubtedly apocryphal. One of those that stretches belief is the tale that the King du Jour, reclining atop the Fort, would look down at his favorite dancer/singer cavorting in one of the baradaris.

However that's the story behind the name, and it'll have to do.

There are actually two baradaris, within a few hundred meters of each other, at Ibrahimbagh. One is the rustic one, bereft of dancers, singers, and any signs of civilization (graffiti obviously qualifies). The other is the rich cousin. Also bereft of dancers and singers, but now with a meretricious necklace wrapped around its bosom.

Long neglected, till recently these two remarkable structures were nighttime hosts to bats and daytime hosts to college students playing hookey from the nearby Vasavi College or en route to the CBIT or MGIT, further down the road to Gandipet.

From December 2004, though, one of them is a "Cultural Complex" run by the APTDC. Which lures you with promises of "Events, Concerts, Performances and Exhibitions". There are a large open air theater, a hotel, a bar, a restaurant, a conference room and a business center. There are even a swimming pool and a billiards table. And just in case you were wondering, yes, there's a souvenir shop.

Without casting aspersions on the urge and necessity to preserve heritage buildings, it's hard to walk though this complex without wondering if the lily has, in fact, been gilded pretty effectively.

Architectural continuity has been given the go-by, perhaps under budget constraints. Lush lawns that will lap up ground water during the hot summers are incongruously juxtaposed with paved courtyards that go ill with the glorious work of the baradari's platform. The upkeep too is showing signs of wear, when seen under the harsh, unforgiving glare of the afternoon sun.

It's when the evening dawns and the lights go on in the baradari, that you can begin to beguile yourself. If you're a couple of drinks down, or if a maestro like Yesudas is holding forth on stage with the magnificent backdrop, hell, you could even go back 300 years in time.

It's a good start, that's for sure. And if it can keep the drunks, the porta-loo hunters, and the graffiti artists away, it's worth more than any criticism we can level. It's just that as the sounds and lights of traffic on the too-close road intrude, and as you stare up at a stars in a sky that's a little less dusty that in the city's center, and you look to the North-East where the other baradari skulks in the gloom, it's tempting to think of what might have been.

About 10km from Mehdipatnam, this is worth the drive anyday. Though poorer in variety, it's infinitely better preserved than the Fort itself. Though it's open from 7 in the morning till 11 in the night, it's best visited in the gloaming, when the hard tramp up the stairs reminds you of how art and culture of the top drawer can knit up the raveled sleave more effectively than any spirits the barman can conjure up.

ADVERTISEMENT
This page was tagged for
tharamathi gana mandira near smaraka
tharamathi gana mandir
taramati baradari gandipet tariff
Vasavi college of engineering near taramati baradari longer house
gandipet taramathi
Follow @fullhyderabad
Follow fullhyd.com on
About Hyderabad
The Hyderabad Community
Improve fullhyd.com
More
Our Other Local Guides
Our other sites
© Copyright 1999-2009 LRR Technologies (Hyderabad), Pvt Ltd. All rights reserved. fullhyd, fullhyderabad, Welcome To The Neighbourhood are trademarks of LRR Technologies (Hyderabad) Pvt Ltd. The textual, graphic, audio and audiovisual material in this site is protected by copyright law. You may not copy, distribute, or use this material except as necessary for your personal, non-commercial use. Any trademarks are the properties of their respective owners. More on Hyderabad, India. Jobs in Hyderabad.