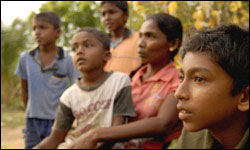 Krithika Akkaraju / fullhyd.com
Background
The Oxford Committee For Famine Relief met for the first time on 5 October 1942 in UK in order to counter the famine that was taking hold of Greece during the Second World War. Oxfam has since spread to over 100 countries the world over. Oxfam set up in India in 1951, and today operates through a network of 6 offices in the country.

Activities
Gender equality, disaster preparedness & response, girls' education, response to conflict & peace-building, and HIV/AIDS are some of Oxfam India's priority programs. Apart from these, they also run campaigns from time to time.

The Make Trade Fair campaign lobbies governments to change the rigged trade rules for developing countries. In India, the campaign focuses on TRIPS, public health and food security, among others.

The "Campaign To End Violence Against Women" (CEVAW) aims at bringing about attitudinal & behavioral change in men and women so as to mitigate domestic violence against women in the Indian society. The campaign is poised for expansion into five other countries in South Asia.

Volunteer Opportunities
Cash donations can be made in favor of "Oxfam India Trust, New Delhi", and mailed to the branch office here. Oxfam employs only full-time members for its programs, and job opportunities are advertised for in the local newspapers. However, volunteers are welcome for its disaster management programs - details of which can be obtained from the office.

ADVERTISEMENT
This page was tagged for
oxfam india trust hyderabad mail id
kausalya estates,karkhana
hno 17 amaravathi housing society kharkana secbad address phone no
moitrayee oxfam india trust at germany
Oxfam india pvt ltd contact
Follow @fullhyderabad
Follow fullhyd.com on
About Hyderabad
The Hyderabad Community
Improve fullhyd.com
More
Our Other Local Guides
Our other sites
© Copyright 1999-2009 LRR Technologies (Hyderabad), Pvt Ltd. All rights reserved. fullhyd, fullhyderabad, Welcome To The Neighbourhood are trademarks of LRR Technologies (Hyderabad) Pvt Ltd. The textual, graphic, audio and audiovisual material in this site is protected by copyright law. You may not copy, distribute, or use this material except as necessary for your personal, non-commercial use. Any trademarks are the properties of their respective owners. More on Hyderabad, India. Jobs in Hyderabad.