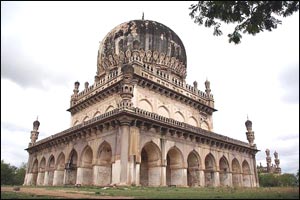 Aishwarya Subramanyam / fullhyd.com
One of the most important tourist spots in the city. We were even brought here on a school excursion, the one time we weren't off to the zoo. And even when you're a snotty schoolgoer, you can feel the spirit of the place, the peace. These are the Qutub Shahi tombs, the mausolea of the 'Sultans of Golconda', surrounded by the lovely landscaped gardens of Ibrahim Bagh. The tombs here consist mainly of the seven Qutub Shahi kings who ruled Golconda for nearly 170 years (all the kings except the last, who was a prisoner in the fortress of Daulatabad, near Aurangabad, when he died).

The carving on these tombs is elaborate and intricate, and the architecture shows a mixture of Persian, Pathan and Hindu styles. The more important tombs are two-storeyed, while the lesser ones are single-storeyed. Almost all tombs are quadrangular, rising upto 15 meters over the terrace with stairs leading up to them. At the center of each tomb stands a sarcophagus, marking the burial vault and the crypt underneath.

During the Qutub Shahi times, the tombs are said to have been magnificent, with chandeliers, carpets and velvet canopies on silver poles. To mark the tombs of the Sultans, golden spires were fitted over them, and the place was regarded with the highest respect. Legend has it that criminals who sought refuge in the tombs were pardoned by the Sultan. After their reign, however, the tombs fell into disrepair, until Salar Jung III got them restored in the early 1800s. Since then, much damage has been wrought on the tombs, and many of the blue and green tiles embellishing the domes are now missing.

Custom dictated that the tombs be built by the kings during their lifetime. Somewhat morbid, it must be admitted. One of the biggest tombs here is that of Ibrahim Quli Qutub Shah, but the tomb of Muhammed Quli Qutub Shah, the founder of Hyderabad, has to be the most impressive. Built in 1602, it rises to a height of 42.5 meters, and has a huge dome and 28 open arches on each side.

But it is not just kings that lie here. Family and faithful subjects of the monarchs have found a place as well. The most important of these is the tomb of Hayath Bakshi Begum, daughter of Muhammed Quli, with a stone tank and a fountain. Two courtesans, Premamati and Taramati, the favorites of Sultan Abdullah Shah, also lie here.

Other important monuments include the dargah of Husain Shah Wali, the revered Sufi saint known as the builder of the Hussain Sagar in 1562; the Mortuary Bath used to perform the ritual washing of the bodies of the dead kings; and the mosque of Hayat Bakshi Begum. The last is known as the great mosque of the Golconda tombs, and has on it the most delicate calligraphic inscriptions. The weight and soul of history in this place is powerful, and might make you want to break into huzoor-speak and bow all over the place. So be warned.

ADVERTISEMENT
This page was tagged for
golconda fort
quli qutub shahi tomb
the qutab sahis
quliqutub shahi tombs
qutub shahi tomb images in hyderabad
Follow @fullhyderabad
Follow fullhyd.com on
About Hyderabad
The Hyderabad Community
Improve fullhyd.com
More
Our Other Local Guides
Our other sites
© Copyright 1999-2009 LRR Technologies (Hyderabad), Pvt Ltd. All rights reserved. fullhyd, fullhyderabad, Welcome To The Neighbourhood are trademarks of LRR Technologies (Hyderabad) Pvt Ltd. The textual, graphic, audio and audiovisual material in this site is protected by copyright law. You may not copy, distribute, or use this material except as necessary for your personal, non-commercial use. Any trademarks are the properties of their respective owners. More on Hyderabad, India. Jobs in Hyderabad.