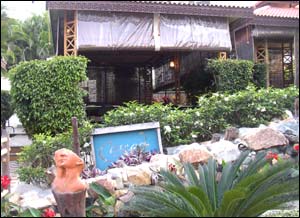 EDITOR RATING
7.5
Food
Service/Courteousness
Ambience
Value For Money
8.0
7.0
8.5
7.5
Suggestions
Good for date/family
NA
Easy parking
NA
Long waiting
NA
The Scene
Celebrations is a multi-restaurant complex if you give it enough benefit of doubt. That's because the menu is the same everywhere, it's just the ambience and staff that changes. Yes, something like Telugu films. Fitting, perhaps, since they are located in the area where most of Tollywood stays.

Cascade at Celebrations claims to offer a water-side dining experience. We looked for water around but did not find any, but maybe that's just us. The place, however, is undeniably cute with its experience of eating in a bamboo thatchment - and cosy, too, if you choose the two smaller enclosures at either ends. The two larger ones have two tables each, while the smaller ones have just one each. Just make sure it does not rain once you sit down to eat. And if you know how to do that, do tell us.

The Verdict
A meal at Cascade can make for a good memory. You can argue that the memory is more in the context and the company than in the place, but well, they can always use a little help.

ADVERTISEMENT
This page was tagged for
celebration jubilee hills telephone number
cascade celebrations contact no
names of restaurants in jubilee hills where u get good sizzlers
jubleehills celebrations
celebration restaurant hyderabad jubilee hills
Follow @fullhyderabad
Follow fullhyd.com on
About Hyderabad
The Hyderabad Community
Improve fullhyd.com
More
Our Other Local Guides
Our other sites
© Copyright 1999-2009 LRR Technologies (Hyderabad), Pvt Ltd. All rights reserved. fullhyd, fullhyderabad, Welcome To The Neighbourhood are trademarks of LRR Technologies (Hyderabad) Pvt Ltd. The textual, graphic, audio and audiovisual material in this site is protected by copyright law. You may not copy, distribute, or use this material except as necessary for your personal, non-commercial use. Any trademarks are the properties of their respective owners. More on Hyderabad, India. Jobs in Hyderabad.