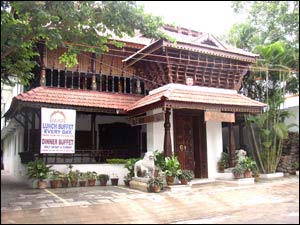 Ravi Mundoli / fullhyd.com
The Scene
When you walk into a place named Hampi, the last thing you're expecting to see is a fountain consisting of two Plaster of Paris dolphins, spouting water from their snouts. The last time we checked, Hampi was a landlocked ghost town, somewhere in the middle of the spectacularly rocky Deccan Plateau. Dolphins weren't exactly in evidence.

When you go in, you find that your misgivings about the decorations are well-founded. While there are thankfully no more aquatic mammals at hand, there's a little too much emphasis on the "traditional" and "ethnic" theme - wall hangings, printed textiles, chandeliers and what-have-you.

Hampi is a newcomer on the Hyderabad restaurant scene, started by the same folks who manage the Athithi Inn in Ameerpet. Tucked away as it is in a nook of Banjara Hills, it doesn't seem to have people beating down the doors yet. The clientele is drawn largely from local residents and employees from nearby corporates.

The Food
If you can look beyond the decor and focus on the food, you may be in for some pleasant surprises. The menu is like National Geographic and happily draws sustenance from several parts of the country and the world.

For the stay-at-home type, there is an entire section devoted to Andhra Pradesh cuisine, including the customary gongura mutton and chepa pulusu type offerings. If you care to invade parts north, you have a reasonably wide choice of Punjabi/Mughlai items. The chicken lababdar is good, and the cloyingly named Kofta-e-Naram Dil does not disappoint. The soups and the rotis are more than commendable.

Further afield, you could choose to be a Marco Polo and sample the pleasures of Cathay - your generic Szechuan, Manchurian variety dishes. And if you're feeling really, really adventurous, you can check out the Continental (or as the menu coyly says, "Non-Residential") fare. A precondition for this is that you know nothing about the state of Western cuisine in Hyderabad. Specifically, the fact that there are approximately 2.75 places which are middling to good, and may accept payments in easy monthly installments over 20 years if you ask them nicely.

Other nits that we might pick: They have airconditioning, and it works, and how! As a precautionary measure, it might be worth it to carry your ski jacket with you. On the other hand, the staff were cooperation personified when requested to take it down a notch, and if the place was a bit more crowded, the animal heat would've definitely helped conditions!

ADVERTISEMENT
This page was tagged for
ntr home address
humpy restaurant in hyderabad
humpy + hyderabad
kundan bagh begumpet haunted house story
kundan baga hyderabad photo
Follow @fullhyderabad
Follow fullhyd.com on
About Hyderabad
The Hyderabad Community
Improve fullhyd.com
More
Our Other Local Guides
Our other sites
© Copyright 1999-2009 LRR Technologies (Hyderabad), Pvt Ltd. All rights reserved. fullhyd, fullhyderabad, Welcome To The Neighbourhood are trademarks of LRR Technologies (Hyderabad) Pvt Ltd. The textual, graphic, audio and audiovisual material in this site is protected by copyright law. You may not copy, distribute, or use this material except as necessary for your personal, non-commercial use. Any trademarks are the properties of their respective owners. More on Hyderabad, India. Jobs in Hyderabad.