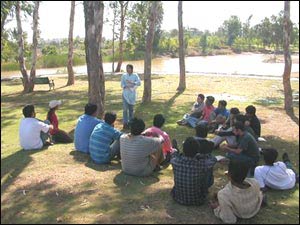 Ramakant D S / fullhyd.com
The hoarding says, "An IDEA can change your life". It's not just a single life that changes with an idea, but humanity itself. Brainwaves, inventions and philosophies arise from that idea to do something different. We maintain a society that will help us nurture and develop these ideas. By discussing these ideas and thoughts with friends, we grow as a person.

It was with this intention that a bunch of enthusiastic engineering graduates set out to form a club in the city. They aimed to create a forum that would serve as the best method of communicating with like-minded individuals. So in the summer vacations of 1999, these students, with the initial help of Mr. Satyanarayana and Mr. Prasad of the IITians Academy (now ProIIT), began their first few meetings at Keyes High School, Secunderabad. With the democratic vote they settled for a name - Helix. Several years down the line and many members later, Helix continues to educate and involve many students.

The original founders went about organizing various college level events such as "Kshitij" and "Reverse Swing". Later the members researched the telecom industry and presented their papers to each other. The present bunch of Helicans are looking forward in organizing various events such as JAM competitions and youth festivals that they have chalked out for the near future.

The session at Helix starts on an informal note as the group gets together under the shade of the large tamarind tree in Chaitanya Vidyalaya (Lower Tank Bund) and catches up on the happenings of the previous week. Once the quorum is considered adequate, the ball is set rolling with the first speaker of the day who begins with a Book Review followed by the Other Review. The Other Review is a talk by a speaker who can give a speech about anything under the sun, which may or may not be another book!

The literary activity of the day begins with the Standard. It is here that the members involve themselves in group discussions, debates, public speaking etc. The session finally ends after the Non-Standard, which is any group activity. In the past there have been Non-Standards such as crosswords, dumb charades, dramatics, Mafia and Quiz.

ADVERTISEMENT
This page was tagged for
Helix hotel chennai
prasad proiit
helix grounds hyd
helix hyderabad
helix in hyderabad
Follow @fullhyderabad
Follow fullhyd.com on
About Hyderabad
The Hyderabad Community
Improve fullhyd.com
More
Our Other Local Guides
Our other sites
© Copyright 1999-2009 LRR Technologies (Hyderabad), Pvt Ltd. All rights reserved. fullhyd, fullhyderabad, Welcome To The Neighbourhood are trademarks of LRR Technologies (Hyderabad) Pvt Ltd. The textual, graphic, audio and audiovisual material in this site is protected by copyright law. You may not copy, distribute, or use this material except as necessary for your personal, non-commercial use. Any trademarks are the properties of their respective owners. More on Hyderabad, India. Jobs in Hyderabad.