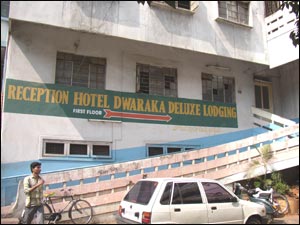 Ghazala Rizvi / fullhyd.com
Hotel Dwaraka Delux, though situated in the same complex as the other Dwaraka hotels, does not boast of aspiring for the same hospitality ideals. The entrance is through a long-winding slope, and as you step into the reception, the policy of the management becomes vividly clear to you. It is to keep to the barest essentials - minimum staff, minimum furniture and minimum service - all towards the cause of maintaining the least possible overheads.

Dwaraka Deluxe is the least expensive of the Dwaraka group of hotels. It has a total of 24 rooms, with 18 double rooms and 3 A/C rooms. We're still finding out why they don't add up. Room service is restricted to getting food from a nearby restaurant (Dwaraka Meals and Ganga, which provide thalis for Rs. 28) for a cash payment. But then, if the current concept of a hotel for you is a place providing the basics - food and shelter - you won't complain about such things of Dwaraka Deluxe. It certainly delivers you value for your money. And considering that you are sitting smack in the middle of town, that's a lot of value.

Dwaraka Deluxe is to Hyderabad what Hotel Ajanta is to Bangalore. It's also much closer to Nampally (1km, 5 minutes) than Ajanta is either to Majestic or East or Cantonment. And it's not half as hard to get rooms. If you aren't feeling much better now, you landed up on the wrong page of fullhyd.com.

ADVERTISEMENT
This page was tagged for
dwaraka hotel lakdikapul in hyd mobil or landline numbers
dwarka delux hydrabad
hotel dwaraka nampalli telephone numbr
hotel dwaraka nampalli
hotel dwaraka nampally hyderabad address details
Follow @fullhyderabad
Follow fullhyd.com on
About Hyderabad
The Hyderabad Community
Improve fullhyd.com
More
Our Other Local Guides
Our other sites
© Copyright 1999-2009 LRR Technologies (Hyderabad), Pvt Ltd. All rights reserved. fullhyd, fullhyderabad, Welcome To The Neighbourhood are trademarks of LRR Technologies (Hyderabad) Pvt Ltd. The textual, graphic, audio and audiovisual material in this site is protected by copyright law. You may not copy, distribute, or use this material except as necessary for your personal, non-commercial use. Any trademarks are the properties of their respective owners. More on Hyderabad, India. Jobs in Hyderabad.