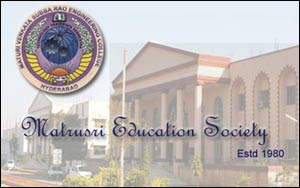 Deepa Menon, with inputs from Swati Reddy and Raj / fullhyd.com
Started by the Matrusri Educational Society - there's one of these behind most successful private colleges, so who says charity doesn't pay? - this college is commonly referred to by the name of its founding body. And Matrusri is one of the few colleges in town that actually delivers on its promise of providing a "well-rounded" education. In terms of sports, cultural and literary activities, an enthu student will find that the college meets him more than halfway.

An OU-affiliated institute, Matrusri was earlier located in Saidabad, but has now moved to a faraway place, in keeping with the general engineering college trend. Not that there's anything wrong with Nadergul. Villagers from the bastis nearby show up in large numbers for the annual college fest, so the organizers need never despair a thin turnout. Thanks to beefed-up security, though, that problem has been taken care of. And now that general standards have improved greatly, the students don't mind being at the mercy of the college canteen either (there's no other food joint for miles around).

Matrusri has a well-equipped labs, Internet connectivity in every department and faculty that's quite involved with its charges. The Electrical Department faculty is especially known for its dedication, and students here actually turn up for classes of their own accord (a rare event). Matrusri also scores highly among other colleges of the same university, and finds a prominent presence among the top ten OU ranks every year.

In terms of infrastructure, the college is getting better all the time. They will soon have a spanking new auditorium and an IT block. The Student Activity Center is in charge of all things cultural, and workshops on music or dance are held occasionally. Inter-college meets are busy times, and although the girls aren't into it as much (except for handball), sports are an important part of the schedule here, with cricket, basketball and volleyball being the most played. Students usually reach University Level every year, and teams have represented the college at REC, Warangal, too.

Speaking of which, Matrusri provides some pretty good opportunities for student exposure each year, as students visit and participate at major college fests all over the country, including Spring Spree and IIT Madras' Sarang, where they've also won prizes. Matrusri's own college fest, Sangamam, enjoys great participation across the campus.

ADVERTISEMENT
This page was tagged for
vidyanagar to mvsr
show charitable clinics in yakutpura
show charitable clinics in saidabad and malakpet and their contact no.
maturi sri hyd hotel number
maturi bus pvt
Follow @fullhyderabad
Follow fullhyd.com on
About Hyderabad
The Hyderabad Community
Improve fullhyd.com
More
Our Other Local Guides
Our other sites
© Copyright 1999-2009 LRR Technologies (Hyderabad), Pvt Ltd. All rights reserved. fullhyd, fullhyderabad, Welcome To The Neighbourhood are trademarks of LRR Technologies (Hyderabad) Pvt Ltd. The textual, graphic, audio and audiovisual material in this site is protected by copyright law. You may not copy, distribute, or use this material except as necessary for your personal, non-commercial use. Any trademarks are the properties of their respective owners. More on Hyderabad, India. Jobs in Hyderabad.