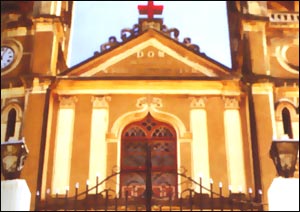 Ayanti Guha / fullhyd.com
It's very easy to overlook St. Joseph's initially. It's in a quiet by lane of Gunfoundry Road, and that too up a slope. But when you do come back for a proper look-see, you understand why you missed it in the first place. While it does not have a very imposing facade or a grim gothic structure, what it does have is a sort of illumination. Benign, but not innocuous.

With its heritage tag, it could be anything but. Dating back 115 years, the cathedral is a testimony to European architecture, nurtured by Hyderabadis. It boasts of an imitation pieta (for those unable to make the trip to the Vatican) and a rare painting of the "Madonna and Child" that create the illusion of stepping back to the Renaissance all over again.

Having been a part of Hyderabad since 1870, St. Joseph's has seen the city grow around it. Hyderabad has changed very rapidly over the years, but the cathedral has not undergone too many of those changes itself. The Church of St.Joseph's has seen to it that it remains what it was intended for right from its inception - a symbol of hope for the people, a sanctuary to those who seek it, and an emblem of a community's worship which has breached its boundaries and touched the lives of all surrounding it.

The place itself seems to exude a sense of calm. It is situated on a small hillock, and seems to tower over the din of a noisy city, albeit benevolently.

If you are looking for tall steeples, pointy spires and stained glass windows portraying nativity scenes, you would be disappointed. This place has none of those. The main things which make it fit in the "church" mold are the 6 bells which were specially brought in from Milan to help the place announce its presence in the midst of a noisy city swirling around it.

These bells are tuned in such a way that hymns can be played on them. When they peal out loudly, they drown out traffic, the chattering school kids and the cacophony of everyday modern life. The choirs (in Telugu too, for the benefit of the locals) fill the place with an air of peace, a rock steady beacon for the community it nurtures.

For the devoutly Christian, they can pay homage at the tombs of 3 priests. The first is Fr. Malbreti, the man with a mission, and who completed the task of the cathedral construction. He loved the church so much, he chose to be interred there much against the prevailing trend of being entombed in Rome or Milan. The second is Resident Bishop Msgr. Caprotti, who died elsewhere but whose mortal remains were brought back and buried here. And the third is Msgr. Vismara, who was the longest serving Bishop and the most loved Father of Hyderabad, and who too was laid to rest here.

This place of worship has a long tale to tell - of Nizams and their opulence and also their benevolence. The royalty of Hyderabad have been patrons for many years, and have contributed to the beautification of St. Joseph's with their gifts of chandeliers, clocks and other centerpieces which the church holds onto proudly as symbols of a bygone era and peoples' faith.

What is especially notable about the cathedral is that right from its inception, it has been secular in nature and has helped to augment the same tone in Hyderabad. Reinforcement for this noble cause came in the form of the Nizam Mir Osman Ali Khan, who was a regular visitor especially for Midnight Mass along with the regular junta.

House of God it may be, but for Father Aroyakam, the parish priest, St. Joseph's is simply home, and he intends to carry out the community-oriented work that has been a tradition there. He looks at his modern flock as the ultimate affirmation of faith that the society invests in the parish.

Father Arokayam affirms that the doors of the church are always open to all, and happily shares that Christmas Day is the one people forward to throughout the year. And it sees the largest turn-out of people, especially amongst the non-Christian devotees.

Currently (July 2006) the cathedral is undergoing major renovations, and is looking towards the same community it has been serving, for help in this mammoth process. And looking at the way the community has been gung-ho in getting the required funds, it's very clear that the cathedral inspires tremendous faith in the hearts and minds of Hyderabadis, and that this is their way of giving back a little of what has been faithfully doled out for so many years, across generations.

ADVERTISEMENT
This page was tagged for
what is order of service in st. josephs cathedral, Hyderabad
gunfoundry st joseph chruch
st. joseph's church gunf
gun foundary church timings
st.joseph cathedral church in namapally corect route
Follow @fullhyderabad
Follow fullhyd.com on
About Hyderabad
The Hyderabad Community
Improve fullhyd.com
More
Our Other Local Guides
Our other sites
© Copyright 1999-2009 LRR Technologies (Hyderabad), Pvt Ltd. All rights reserved. fullhyd, fullhyderabad, Welcome To The Neighbourhood are trademarks of LRR Technologies (Hyderabad) Pvt Ltd. The textual, graphic, audio and audiovisual material in this site is protected by copyright law. You may not copy, distribute, or use this material except as necessary for your personal, non-commercial use. Any trademarks are the properties of their respective owners. More on Hyderabad, India. Jobs in Hyderabad.