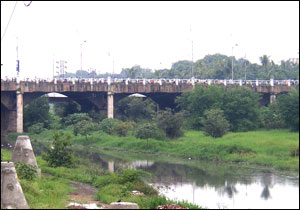 Ayanti Guha / fullhyd.com
It is said in the annals of history that the Purana Pul was built by the Qutb Shahis over 400 years to make the commute between Golconda, the seat of their power, and Hyderabad city much faster. The bridge became the link between the two places and was of strategic importance to the dynasty altogether.

So what does romance have to do with this all? Ah! Well, it would seem that apart from being the Lord and Master of all he surveyed, Ibrahim Quli Qutb Shah was also a doting father. He had the bridge built so his lovelorn son would not endanger himself when he went to meet his beloved Bhagmati (after whom Hyderabad is named).

In fact, history has sort of glossed over the importance of the Pul from the angle of governing. Even foreign historians like Tavernier called it the "bridge of love", and compared it to Pont Neuf in Paris. A claim which isn't too tall if one compares structures alone.

The bridge was reconstructed in 1820 by Sikander Jah, and was called Purana Pul after a new bridge (Naya Pul) was built to its East. It stands 53 feet above the riverbed, and has a row of 22 huge arches. Purana Pul was reopened in 2002, and hundreds of couples who had had inter-caste marriages walked across it to celebrate their love.

All right, so there's a dampener. Historians deny that there is any evidence linking the legend to the bridge, with one researcher saying, "When the bridge was built the young prince was only 12 years old. It is ridiculous to think that he was so madly in love at that age." Makes a good story though, doesn't it?

But romance and practicality aside, the bridge does not seem to play too important a role nowadays. Fairly innocuous looking, it is no different from any other bridge that has been standing for years on end. In its heyday, it might have been an important conduit. But now, it has been reduced simply to the "Old Bridge", and has had to make way for the new one. If it still holds any value, it's only for the vendors who sell their wares there.

The entire area is very crowded, and you end up getting jostled quite frequently. A stench of overripe fruits and vegetables emanates from the bridge area, and a putrid smell of the Musi washing the trash away from the garbage dump below wafts up frequently. All in all, not a pleasant site.

And the Musi, which used to flow in a steady stream earlier, is now reduced to a mere trickle and regains its former glory only when the waters of Osman Sagar are released. A far cry from the sight which must have greeted the eyes earlier. For, among the first bridges to span the Musi, Purala Pul stood strong with all its 22 arches rising above the gushing waters of the river. And it has stood firm despite many devastating floods over the centuries. It even earned praise from a Persian traveler who likened it to "a pearl in its oyster". So safe was it from the marauding waters.

Sadly though, the area surrounding the bridge is now not for women. You stand to be "run" into, lewdly commented upon or just gawked at to the point of discomfort. While rowdy people are not the only ones adorning the bridge, they pretty much make up most of the junta there.

Time has also been testing the foundations of the bridge. With numerous banyan trees which have caused deep cracks in the walls and the arches, it seems to be heading towards dilapidation in another few years. Truly a sad state of affairs especially since the state government has decreed it to be a protected monument. A proper fortification of it could prevent the collapse and also save a piece of Hyderabad's "Shahi" past.

An ignominious state it may stand in today, but it once symbolized a strategic structure specially constructed by the Nizams to aid in their governance, gains and often their getaways. The path still leads to the Golconda Fort, although it is closed to the public and a more roundabout route has to be taken to get to the fort.

ADVERTISEMENT
This page was tagged for
puranapul.darwaza pragathi nagar
Pul photo
collkata Kate Harra pul
ASHRAF'MOBILE'NEAR'PURANA'PUL 01 DAMADUM MAST QALANDER.MP3
who called the purana pool as the bridge of love
Follow @fullhyderabad
Follow fullhyd.com on
About Hyderabad
The Hyderabad Community
Improve fullhyd.com
More
Our Other Local Guides
Our other sites
© Copyright 1999-2009 LRR Technologies (Hyderabad), Pvt Ltd. All rights reserved. fullhyd, fullhyderabad, Welcome To The Neighbourhood are trademarks of LRR Technologies (Hyderabad) Pvt Ltd. The textual, graphic, audio and audiovisual material in this site is protected by copyright law. You may not copy, distribute, or use this material except as necessary for your personal, non-commercial use. Any trademarks are the properties of their respective owners. More on Hyderabad, India. Jobs in Hyderabad.