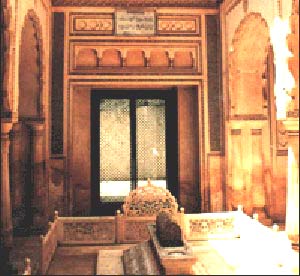 Aishwarya Subramanyam / fullhyd.com
You've got to hand it to the architects of old. They anticipated Hyderabad's extreme weather conditions and built around them. In the HUDA (Hyderabad Urban Development Authority) office, no one complains about the intense heat at the peak of summer, even though they have no air conditioning or coolers. Employees may collapse from the heat on their way to work, but once they're inside the building, they only collapse from inactivity. (We are of course kidding. We value government employees very highly. Very.)

This is because the Paigah Palace, where they work, is a marvel of architectural design, with high ceilings, massive rooms and thick walls to keep out the heat, not to mention cunning ventilation that allows air to circulate freely. This huge palace has a neo-classical facade, a grand portico with entablature, semi-circular arches, Corinthian columns and deep, arcaded verandas on all four sides. I have no idea what that means. But you don't need to know architectural styles to appreciate beauty in stone or to wonder at carefully carved wooden staircases. Office mundanities and irrelevant furniture nonwithstanding.

The palace was built by Vicar-Ul-Umara, the Paigah noble who is famous for having built the Falaknuma Palace. He was Prime Minister when he handed over the Falaknuma at the behest of the sixth Nizam, Mir Mahbub Ali Khan. He then built the Paigah Palace, also known as the Devdi Iqbal-ud-Daula, in the 1880s, along with a number of others on his 150-acre stretch of land. The Paigahs were the highest-ranking nobles at that time, second only to the ruling family.

ADVERTISEMENT
This page was tagged for
paigah palace begumpet no.
hyderabad lands of paigah
paigah palace rent
abids to paigah palace
mehdipatnam to paigah palace
Follow @fullhyderabad
Follow fullhyd.com on
About Hyderabad
The Hyderabad Community
Improve fullhyd.com
More
Our Other Local Guides
Our other sites
© Copyright 1999-2009 LRR Technologies (Hyderabad), Pvt Ltd. All rights reserved. fullhyd, fullhyderabad, Welcome To The Neighbourhood are trademarks of LRR Technologies (Hyderabad) Pvt Ltd. The textual, graphic, audio and audiovisual material in this site is protected by copyright law. You may not copy, distribute, or use this material except as necessary for your personal, non-commercial use. Any trademarks are the properties of their respective owners. More on Hyderabad, India. Jobs in Hyderabad.