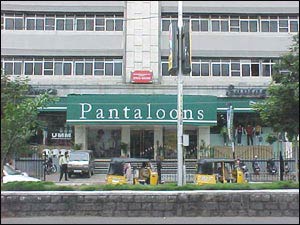 Neha Kamdar / fullhyd.com
It's 6 o'clock on a midweek evening, and the store is bustling with a fair number of customers. I stare at a wall behind a salesman eagerly approaching me. There's a poster of a very chiseled male model wearing the latest in fashion. They used to have a poster of Ajay Jadeja there, years back. I suppose he isn't that fashionable right now. And Pantaloons is a store that keeps time with the changing trends.

It really does. One of the first stores of its kind in the twin cities, Pantaloons has among the most wearable ranges of clothes. There is a limited selection of premium brands on offer, alongside quality clothing for lesser mortals at affordable prices. Formals and casuals for men, women and children occupy most of the space here.

The men's section is well-stocked, and Pantaloons keeps tons of material in men's trousers, a move that is increasingly not fashionable, but nonetheless very convenient. The highlights of the women's section are the skirts and kurtis, both of which are colorful and attractive. Apart from these, you've also got to look out for their range of sweaters, particularly polo-necked ones, for women, and their collection for new-borns.

They have accessories too, but these are limited. The jewelry fits into one shelf, but they do have nice printed socks, and colorful belts for kids. You might spot the occasional 'ethnic' neckpiece or jhola, but if that's specifically what you're looking for, Dastkaar might be a better option for you. There are also bags, belts, umbrellas and raincoats.

The service staff, unlike at other big stores, is not forever tailing you. They give you your space, and provide helpful, relevant information when asked for it. This factor alone makes a world of a difference to anyone who prefers a quiet, private shopping experience.

At the look of it, parking might seem like a problem, but don't worry - they have valet. There's also a branch at Narayanaguda, which has the same stuff. They only stock their own brands, unlike other stores, but more often than not, you're bound to find something you like.

ADVERTISEMENT
This page was tagged for
E a branch pantaloons number
begumpet pantaloons shop pics
begumpet pantaloons shap com
Begumpet pantaloon address
pantaloons begumpet open today
Follow @fullhyderabad
Follow fullhyd.com on
About Hyderabad
The Hyderabad Community
Improve fullhyd.com
More
Our Other Local Guides
Our other sites
© Copyright 1999-2009 LRR Technologies (Hyderabad), Pvt Ltd. All rights reserved. fullhyd, fullhyderabad, Welcome To The Neighbourhood are trademarks of LRR Technologies (Hyderabad) Pvt Ltd. The textual, graphic, audio and audiovisual material in this site is protected by copyright law. You may not copy, distribute, or use this material except as necessary for your personal, non-commercial use. Any trademarks are the properties of their respective owners. More on Hyderabad, India. Jobs in Hyderabad.