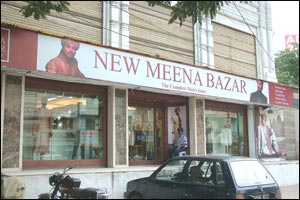 Vardhan A / fullhyd.com
Meena Bazar has always been associated with its ladies' collection. Be it its saris, kurtas or suits, it has stood the test of a brand's worst enemy ? time. But in such a store, it wasn't long before some enterprising and exhausted clerk came up with the idea of opening an exclusive men's outlet.

No more would he have to suffer the ignominy of having to bring down every dress in the shop, just to pander to some silly girl's window shopping fantasies. No sir. In a men's store, it would be different. People would come in, point to what they want, buy it and walk away. Nirvana at last! And any clerk who proved his spurs in the ladies' section could get into the men's store as a reward. Works out every way you look at it.

And so, we come to the exclusive men's outlet of Meena Bazar. I am sure even women who shop for men in this store are given frigid looks and brusque responses. The store has been here for quite a while now ? 9 years to be exact ? and houses everything you would ever need to satisfy your ethnic wear demands. Everything from kurta-pyjamas to Jodhpuri suits to brocade salwars, they have it all. Added to this staggering collection, they also have formal suits ? Blackberry's, Park Avenue, Reid And Taylor, and loads of other brands.

ADVERTISEMENT
This page was tagged for
wholesale pants shop in meena bazar mysore
meena bazaar birmingham
meena bazar panjagutta
Koti meena bazar
Meena Bazaar mysore
Follow @fullhyderabad
Follow fullhyd.com on
About Hyderabad
The Hyderabad Community
Improve fullhyd.com
More
Our Other Local Guides
Our other sites
© Copyright 1999-2009 LRR Technologies (Hyderabad), Pvt Ltd. All rights reserved. fullhyd, fullhyderabad, Welcome To The Neighbourhood are trademarks of LRR Technologies (Hyderabad) Pvt Ltd. The textual, graphic, audio and audiovisual material in this site is protected by copyright law. You may not copy, distribute, or use this material except as necessary for your personal, non-commercial use. Any trademarks are the properties of their respective owners. More on Hyderabad, India. Jobs in Hyderabad.