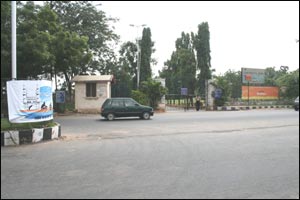 Neha Kamdar / fullhyd.com
It runs a long distance along the edge of the Hussain Sagar Lake, Sanjeevaiah Park. As you enter, the first thing you're tempted to do is to walk to the railing on the left, and look at the lake for a while. There are moorhens, close to the shore, black, with a white Mohican-like stripe across their heads. Are you disturbing them? Well, if you look around you, you might get the feeling that indeed, you're invading privacy here. The park is famous for certain kinds of rendevoux, and the entire city knows that. But walk on.

Sanjeevaiah Park is one of the oldest and largest around, having reached a stage, you'd be inclined to think, where it becomes self-sustaining. A part of it is being remodeled, but then, as most people remember, some part of it is always being remodeled. Spread over a vast area, the park has more than enough space for those who want to relax on the lawn, or play a while with a Frisbee. Then there is the path cut out for the walkers, which there are plenty of. This walkway is the ideal way to see the park, as it makes a complete circle, almost like a guided tour of the patches of landscaping, the amusement park for kids, the canteen and the tennis courts. And all this under the shade of some ancient trees.

ADVERTISEMENT
This page was tagged for
parks nearest to tank band
sanjeevaiah park near neakles road Hyderabad images
contact person for sanjeevaiah park
sanjeevian park
sundaraiah park Tank band
Follow @fullhyderabad
Follow fullhyd.com on
About Hyderabad
The Hyderabad Community
Improve fullhyd.com
More
Our Other Local Guides
Our other sites
© Copyright 1999-2009 LRR Technologies (Hyderabad), Pvt Ltd. All rights reserved. fullhyd, fullhyderabad, Welcome To The Neighbourhood are trademarks of LRR Technologies (Hyderabad) Pvt Ltd. The textual, graphic, audio and audiovisual material in this site is protected by copyright law. You may not copy, distribute, or use this material except as necessary for your personal, non-commercial use. Any trademarks are the properties of their respective owners. More on Hyderabad, India. Jobs in Hyderabad.