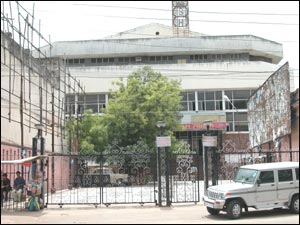 Najaf Ishrati / fullhyd.com
EDITOR RATING
7.0
Comfort
Ambience
Cleanliness
Audio/Visual Quality
6.0
6.0
7.0
7.0
Suggestions
Good for date/family
NA
Easy parking
NA
Decent legroom
NA
There are two ways of going to Santosh. Both of these will get you tickets, but one wont let you watch the movie. The first way lands you at the ticket counter, where you can buy as many as tickets you want. The second way will get you just one ticket, and the usher wont accept this. No, its not that the theater is selling bogus tickets - its just that the second set of tickets are handed out by the khaki-clothed men. Santosh lies on Abid Road, which has been one of the oldest one-way streets in Hyderabad.

Its unique location may have led to many of the following types of exchanges between two Hyderabadis:

A: Cmon, lets go or we wont get tickets!
B: Chill, well call Prasads.
A: Say what now? Theyre sold out?
B (philosophically): O well theres always Santosh.

If you live north of Abids, youve probably met A and B. If you happen to live south of Abids, replace A & B with X & Y, and Prasads with Ramakrishna. However, the constant in both the equations remains Santosh. For, that is what Santosh typically is. A reservoir for the ardent movie buffs, a movie screener of the last resort.

Thanks to a location which is bang in the center of Hyderabad, Santosh easily accepts the spillover crowd coming from all directions. Patrons who come here are generally from the Old City, and Santosh mostly caters to them by playing only Hindi films. The norm here is to pay the distributors by the week for each movie, increasing the chances of you finding the latest craze which you want to catch.

In the 26 years of its existence, Santosh has been renovated 5 times, the last time being in 2006. However, the teak wood paneling in the lobby still remains all of a quarter of a century old. And with the shiny polishing work, it still retains its charm and grandeur. It serves as an automatic deterrent to the Rajnigandha gobblers, forcing them to look elsewhere.

One of the ironies of this cinema is the ramp. While some theaters use stairs, and others have gotten round to escalators, Santosh still uses its ancient ramp. Its probably the only place in the world where it is the audiences who get to walk a red-carpeted ramp to see their models and actors.

A huge, huge plus point once you get inside, is the distance between the two rows of seats. No wonder they dont air the statutory message "Please dont keep your feet on the chair in front" during intervals. The reason is not too far beyond comprehension. Its impossible even if you wanted to. If you wanted to play at being Rangeelas Aamir Khan inside Santosh, youd also have to be Shaquille ONeil. Or Michael Jordan. Or Completely Horizontal.

Come to think of it, Santosh is full of ironies. One message that they do air during the intervals is that of No Smoking. However, the photo sports a James Bond sort of man casually lighting a cigarette, with the lighter obscured by a small encircled cross. The effect which gets conveyed is probably more to remind the smoker of his depleted serum nicotine levels, rather than advocate the evils of smoking to the general public. Little wonder, then, that king-sized Gold Flakes can be had for Rs. 5, just outside in the lobby.

The lobby has comfortable sofas, and small tables with bowls in front. Ostensibly, these are supposed to serve as ashtrays. However, the hovercraft-class swinging pedestal fans make sure that flicking the ash on the ground or inside the bowl has the same net effect.

When you enter the hall, the red carpet welcome always gets a tad overdone. As you climb the stairs and emerge onto the landing, remember to hold on to something. Stepping on to the red carpeted cushioning of the landing is like stepping on 10 feet of hay stacked in a vertical column.

Air-conditioning is absent, but you do have air coolers, with blowers powerful enough to make sure that you have bad hair days for six consecutive days.

In the end, Santosh stands good on the promise lent by its name, and the experience can be called just that. Satisfactory. Santosh is, and remains, a place to go to when youre out of options.