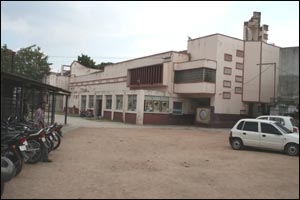 Rohit Murari / fullhyd.com
EDITOR RATING
5.0
Comfort
Ambience
Cleanliness
Audio/Visual Quality
5.0
4.0
6.0
4.0
Suggestions
Good for date/family
NA
Easy parking
NA
Decent legroom
NA
Anjali screens your weekly dose of films that belong to the Shakeela genre - i. e. smut. Formerly known as Chitra, the theater was taken over by its current management in 1977 and renamed Anjali. Surprisingly, it was renovated a decade and a quarter later - the only evidence of this being the air-cooling that does a decent job.

The seating reminds you of the earthquate scene in Mackenna's Gold, and if you're going to watch a movie here, it means that either you are sex-starved, or you are reviewing it.

The theater has huge parking space - so huge, in fact, that you can park all the vehicles here that have never been parked here since 1977, all at once. Anjali normally serves as a refuge for those who couldn't get tickets at Manju.
Share. Save. Connect.
Tweet
ANJALI (S D ROAD) SNAPSHOT
MOVIES AT ANJALI (S D ROAD)
There are no movies at Anjali (S D Road) scheduled currently.
ANJALI (S D ROAD) USER REVIEWS
1 - 4 OF 4 COMMENTS
POSITIVE  |  NEGATIVE |  NEWEST  |  OLDEST  |  MOST HELPFUL  |  LEAST HELPFUL
USER RATING
7.2
6 USERS
Comfort
Ambience
Cleanliness
Audio/Visual Quality
5.0
5.0
7.0
7.0
Good for date/family - No
Easy parking - Yes
Decent legroom - Yes
vasueicon on 26th Apr 2012, 2:05am | Permalink
It was renovated at the time of Panjaa..same mini theater...screen is not enough for 'Big' movies .


Pros: Location
Cons: Masses around
RATING
6
Sandeep on 23rd Sep 2010, 9:56pm | Permalink
Used to be good in the early nineties and later started showing B grade movies. I thought this theater closed until recently when I saw it's name listed in one of the movie's theater list.

ADVERTISEMENT
This page was tagged for
B grade movies contact numbers hyd
b grade movies in hyd theatre
in Hyd new b grade movies in theaters
Panty to anjali theater route
Anjali 70mm
Follow @fullhyderabad
Follow fullhyd.com on
About Hyderabad
The Hyderabad Community
Improve fullhyd.com
More
Our Other Local Guides
Our other sites
© Copyright 1999-2009 LRR Technologies (Hyderabad), Pvt Ltd. All rights reserved. fullhyd, fullhyderabad, Welcome To The Neighbourhood are trademarks of LRR Technologies (Hyderabad) Pvt Ltd. The textual, graphic, audio and audiovisual material in this site is protected by copyright law. You may not copy, distribute, or use this material except as necessary for your personal, non-commercial use. Any trademarks are the properties of their respective owners. More on Hyderabad, India. Jobs in Hyderabad.