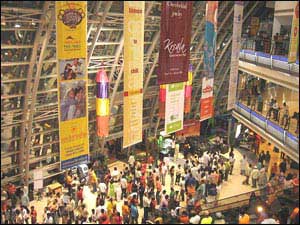 EDITOR RATING
8.5
Comfort
Ambience
Cleanliness
Audio/Visual Quality
6.5
9.0
9.5
9.0
Suggestions
Good for date/family
NA
Easy parking
NA
Decent legroom
NA
Prasads is arguably the most hyped multiplex in the city. That's partly legacy and partly substance. However, there's another part to the substance that's not entirely something worth hyping. But let's get there in time.

The first multiplex to hit Hyderabad and provide world-class entertainment to the denizens of the twin cities, Prasads opened its doors in 2002 to almost undisputed awe. Most people (including all Telugu movie dialogue-writers and most Telugu-speaking folks) continue to call it "IMAX theatre", showcasing the focus the place put on its IMAX screen (Prasads has 4 normal screens and 1 IMAX screen, and is in addition a full-fledged mall), which is referred to as Asia's largest movie screen. Now is being Asia's largest movie screen a good thing? Later.

First, the good stuff. You pay almost strictly for the crowd at Prasads. A whole lot of people in Hyderabad's software/corporate circuit and high-end residential areas will never be seen in any of the RTC X Roads theatres (however good they might increasingly be), and as butt-pinching became lesser of a one-off thing even at the now-history Sangeet, Prasads became the capital for movie-watching for all who could afford it. And the number who can is astounding - try getting a ticket to your favorite film on a weekend. Then try getting a ticket to a not-so-favorite film.

Yes, for many people, it's the people around - Rs. 100 per ticket is a surprisingly close metaphor for a civilized crowd - that is the biggest draw at Prasads. Then, the men/women at the ticket counters are mostly polite and speak English (both a strict no-no at the non-multiplexes), the toilets are kept clean, the food is served through a pretty hygienic system and by pleasant people, the shows start on time, and yes, the A/C is always switched on.

Only, the movie-watching experience is certainly not the most comfortable. For starters, the halls at Prasads (except IMAX, which has the opposite problem) are almost tiny, compared especially to just any screen at RTC X Roads, even the 35mms. Then, if you do not get tickets in the first 6 rows - A-F - you are doomed to a less-than-memorable 2 hours. And if in addition your tickets are to one extreme of the row rather than near the aisle, you can forget that you came to have a good time.

Indeed, it's pretty surprising that you have to pay Rs. 100 to sit in the top row as well as about 5 metres away from the screen, killing your neck and getting a headache. Then, the legroom - or lack of it - can be traumatizing for anyone above 5'8". Prasads has perhaps the least legroom of all cinemas in town. Tall people have to remember to ask for aisle seating (or the F row) if they want to concentrate on the movie and not on how ecstatic it would be to able to stretch their legs once.

The IMAX hall is certainly over-hyped. Screens being huge is not a plus - there's a reason that they maxed out at 70mm. The IMAX hall at Prasads is huge, but given the screen is also huge, if you do not get to sit in the top, say, 5 rows, it can feel even more tortuous than similar seating in one of the other 4 screens. It's almost a joke that you have to pay Rs. 150+ for that. And the legroom problems are just as pronounced. Numbering in IMAX starts from the bottom - A is the bottom-most row, as opposed to being the topmost at the other screens - so if you get say C-40, you're so, so screwed.

IMAX can, of course, be a treat if you get to sit high enough and if the movie was meant to be watched in IMAX format. Prasads however routinely screens normal films on the IMAX screen (and charges Rs. 150 for it), and you really should stay away unless you are desperate.

Being the first to bring professionalism to movie-screening however has its pluses - legacy always helps, no? And so Prasads is routinely mentioned - and shown - in Telugu films (as "IMAX theatre"), and that keeps adding to the hype. It's a dream upgrade for most youngsters who frequent Ramakrishna, Sensation and the X Road theatres, and an addictive upgrade - after you experience Prasads, you find it tough to go back to a place where the ticket-seller is restive and even abusive, the guy who gives you samosas with his hand also uses it to pick his nose or scratch his crotch, and the loos are a nightmare.

When it opened at Rs. 60 in 2002, almost twice Sangeet's peak rate at that time, few thought Prasads would be a roaring hit. At Rs. 100 today, it's just as frenetic. People care for the professionalism despite all the shortcomings, and the incessant crowds show it each passing day. Plus, Hyderabad is much richer than most of us realize.


Pros: maintenance
Cons: basement parking
RATING
10
Mungalla Rama Krishna on 1st Apr 2011, 4:55pm | Permalink
I watched some movies with my family. Its really good family entertaining place.
anish316 on 28th Oct 2010, 8:12pm | Permalink
continuing from there .... so where exactly is dis guy getting d tickets from . Answer - The management . Yes .... the tickets he cannot sell are d ones you get in the so-called last minute cancellation in case you ever wondered who would be foolish enough to cancel tickets to a rajni movie first day first show...The authenticity of this information ? well u have to trust the writer who himself was shamelessly lured into this disgusting act till recently .. So yeah ... in case ur tempted to call this number for the tickets its your call ... in case u become morally enlightened to the plight of the deserving people who stand in the lines ... and u are /know a person who can make a difference kindly take action. else you'd see this guy sitting on a scooter beside d sugarcane juice bandi outside prasads sellin d tickets to people who areready to shell 250 for a 150 ticket and take d easy way out
Anish kolly on 28th Oct 2010, 8:03pm | Permalink
Prasads multiplex -- the trendsetter to a whole lot of grander and fancier multiplexes to come ... yet has a home like feel to it ... Everything thats there about the theatre has alrady been seen or said except for one minor thing .....
The Great Black scam ... you dont need to moviebuff to know that if you dont book the tickets within one hour of opening of the advance booking ur not likely to find the tickets of a movie you wantto see on the first day ... Now seriously you think 300 odd seats in like 7-8 shows would be filled up within an hour ? so wher r d damn tickets ? Answer - prserved for the high level recommendations and more unfortunately for the people who are ready to pay in Black . you do need to be a moviebuff to know about thisthough- necessity is d mother of inventions and discoveries they say . 9989952326 -- call up this guy ... better known as ticket narsimha and buy your tickets till 10 mts before d show .

RATING
7
Mungalla Rama Krishna on 27th May 2008, 5:55pm | Permalink
Must Maintain foreign standards and good comfort and cleanliness for ever
RATING
6
Gerald on 25th Oct 2014, 8:25pm | Permalink
Must Maintain foreign standards
asdfghjk on 24th Apr 2008, 7:22pm | Permalink
I went to the bathroom and found, to my horror, tha tthe staff was using the toilet.What happenned to good manners?
Then I went to the popcorn stall, and I found the staff talking in telegu - where are the mannewrs? Just because we are in Heyderabad doesn't mean that everyone knows Telegu. Otherwise they should teach Telegu.
In the movie hall, I was bitten by a bug - in the bumsee. No manners!!!!


Pros: Sound quality
Cons: Bugs, telegu speakin
meghraj on 15th Mar 2013, 6:30pm | Permalink
first you learn english properly then try to point out others you dont know spelling of telugu then how would you think that you have manners
Harsha on 27th Jan 2013, 7:58pm | Permalink
Please, respect your mother tongue. Speaking in Telugu isn't offense. Telugu might not be your mother tongue. But do-not treat it as a low level language. Manners are not in speaking the language you like. It is the behavior and character.
The staff there are not any graduates. They are the local people with minimum education. Complain if you are treated badly.
naveen on 28th Dec 2012, 3:08pm | Permalink
this is hyderabad and people ofcourse speak their mother tongue
Akshay on 24th Apr 2008, 2:34am | Permalink
I personally think that this is one of the most hyped theaters that didnt reach my expectation....everything is good such as sound and atmosphere but the only thing i did not like was the seats.....u cant lean back with the seats....it was a pain in the neck to watch om shanti om for 2:45 hrs without relaxing.....waiting to go c IMAX

ADVERTISEMENT
This page was tagged for
Prasad malti plex ntr garden hyd contact no
prasad multiplex ntr garden hyd contact no
prasads movie hall address
prasads multiplex phone number
prasad multiplex theatre
Follow @fullhyderabad
Follow fullhyd.com on
About Hyderabad
The Hyderabad Community
Improve fullhyd.com
More
Our Other Local Guides
Our other sites
© Copyright 1999-2009 LRR Technologies (Hyderabad), Pvt Ltd. All rights reserved. fullhyd, fullhyderabad, Welcome To The Neighbourhood are trademarks of LRR Technologies (Hyderabad) Pvt Ltd. The textual, graphic, audio and audiovisual material in this site is protected by copyright law. You may not copy, distribute, or use this material except as necessary for your personal, non-commercial use. Any trademarks are the properties of their respective owners. More on Hyderabad, India. Jobs in Hyderabad.