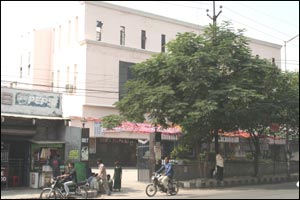 Mithun Verma / fullhyd.com
EDITOR RATING
3.0
Comfort
Ambience
Cleanliness
Audio/Visual Quality
4.0
2.0
3.0
2.5
Suggestions
Good for date/family
NA
Easy parking
NA
Decent legroom
NA
Heck, whatever that saying about caterpillars and metamorphosis was, they were surely not talking about Usha Mayuri there. That's because there actually is no saying about caterpillars and metamorphosis. But in case there was, they would be talking about it. It = Usha Mayuri, not the saying.

Some men are just born with a silver spoon. Ramoji Rao is that monarch with the Midas touch. The most popular newspapers, channels, studios and, now, theaters. Usha Mayuri is another example of his high standards.

A stone's throw away from his first baby Sri Mayuri, Usha Mayuri is a resurructing revamp of a sad place called Subhash. Subhash was the kind of place you would go to:

Usha Mayuri has definitely changed all that. Except the last part about bad movies - nobody can predict those.

Usha Mayuri has plenty of leg space and great bucket seats. It also has a neat sound arrangement along with clean premises. But the parking is really crummy. It takes centuries to get a vehicle out of the overcrowded pit. The screen is also a big let down. Size does matter, you know.

In all, however, the theater is a good place to catch one of the latest flicks to hit town.

Also read: Sri Mayuri
Share. Save. Connect.
Tweet
USHA MAYURI 70MM (GOLCONDA... SNAPSHOT
USHA MAYURI 70MM (GOLCONDA X ROADS) SNAPSHOT
EVENTS AT USHA MAYURI 70MM (GOLCONDA...
MOVIES AT USHA MAYURI 70MM (GOLCONDA X ROADS)
There are no movies at Usha Mayuri 70mm (Golconda X Roads) scheduled currently.
USHA MAYURI 70MM (GOLCONDA... USER REVIEWS
USHA MAYURI 70MM (GOLCONDA X ROADS) USER REVIEWS
1 - 5 OF 5 COMMENTS
POSITIVE  |  NEGATIVE |  NEWEST  |  OLDEST  |  MOST HELPFUL  |  LEAST HELPFUL
USER RATING
2.0
1 USER
Comfort
Ambience
Cleanliness
Audio/Visual Quality
5.5
4.5
4.5
4.0
Good for date/family - Unsure
Easy parking - Yes
Decent legroom - Yes
vazrox on 16th May 2017, 2:02pm | Permalink
Seems like renovation has started....Will update all details soon
Vazrox on 30th Jun 2017, 9:06am | Permalink
Update : The whole building has been brought down ..still no confirmation whether it's going to be a mall/multiplex or sold to a realtor for apartments....will update the progress on this thread.
Vazrox on 26th Aug 2016, 8:53am | Permalink
Closed as of now...no signs of any renovation
Perugu Balasubramanyam on 5th Jan 2013, 7:08pm | Permalink
Bakaram Bustop is the correct address just opposite Spencer now showing Mithunam previously Onamalu was also played so this cinema theater must boast of clintale who love such good movies amids all this etc etc movies
vasueicon on 27th Apr 2012, 2:31am | Permalink
Highest class at ground..1st class is at balcony..if you enter in the balcony..you'll know what went wrong ..when constructing/renovating the theater..view angle will not be good..sound is okay..screen is between 35mm and 70mm
2power10 on 18th Aug 2009, 10:07am | Permalink
nice if you like rats nibbling at you. i'm not kidding. i've seen rodents roam about in Shanti and other theatres, too, but they don't climb up seats. usha mayuri has one of the most passive managements, ever, maybe owing to the complete lack of interest film distributors also seem to show, going by the kind of flicks here.

ADVERTISEMENT
This page was tagged for
in Hyderabad Santosh Nagar Yadagiri theatre which movie was going hell
present movie on ushamayuri golconda x roads
Sri mayuri theatre renovated
usha ma6uri 70mm theatr4e golconda x roaads
Super market avnu vacancy in ahmedabad
Follow @fullhyderabad
Follow fullhyd.com on
About Hyderabad
The Hyderabad Community
Improve fullhyd.com
More
Our Other Local Guides
Our other sites
© Copyright 1999-2009 LRR Technologies (Hyderabad), Pvt Ltd. All rights reserved. fullhyd, fullhyderabad, Welcome To The Neighbourhood are trademarks of LRR Technologies (Hyderabad) Pvt Ltd. The textual, graphic, audio and audiovisual material in this site is protected by copyright law. You may not copy, distribute, or use this material except as necessary for your personal, non-commercial use. Any trademarks are the properties of their respective owners. More on Hyderabad, India. Jobs in Hyderabad.