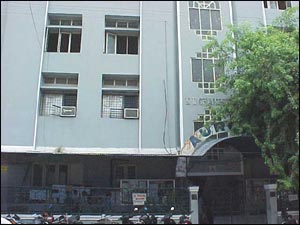 Priyanka Pulla / fullhyd.com
Aurora Degree College, pronounced "Arora", is housed in a cloudy-grey building in the bylanes of Chikkadpally. The cheerless exterior gives way to a glossy grey interior, a common architectural peculiarity of overcrowded cities. Never judge a building by its faade, especially in Hyderabad. A tin shack it may well be on the outside, but in the blink of an eye as you get in, it can transform into a 5-star hotel. In all respects, except the space!

Well, within the cramped but shiny interiors, students mill around wearing formals, down to ties for guys and dupattas for girls. The dress code is formals four days a week, something the boys express their composed delight about. Purportedly because it's "good for their future when they will be working", but obviously because they are secretly thrilled with the opportunity to look like studs, day in and day out.

The only places to hang out are the narrow compunds enclosing the building, and the basement cafeteria. The cafeteria is something to speak about, because it is dimly lit and has spot-lit chess and carroms tables, and a gym. A dwarfed but highly serviceable cousin of the games arcade from Prasad's. Free flowing iced-tea, machine coffee, junk food and a raised platform that doubles as a dance floor: all together seem to work a magic that keeps the students hanging in there long past college hours.

In the background, Aurora has a regular college running that demands 75%, non-negotiable attendance from the students. Seminars and workshops, sometimes of a national level, are regularly hosted by Aurora. The faculty that is rotated between all twelve colleges (which include engineering and an upcoming MBA one) has a number of doctorates and industry professionals. Co-curricular activities are also numerous, as the glossy, B-school style college handbook will tell you.

Placements seem to be above average here, with ICICI Prudential, GE, Satyam, Wipro and the other usual suspects picking up a number of students. An ex-student of Aurora even got into the Indian Foreign Service right after graduation here.

En fin, it seems like a college that has a good mix of all ingredients but doesn't really get into the elite league. Probably a matter of time, and further re-engineering and refurbishment. (The first round that re-did the buildings and dress code has clearly done its due).
Share. Save. Connect.
Tweet
AURORA P G COLLEGE... SNAPSHOT
AURORA P G COLLEGE & DEGREE COLLEGE SNAPSHOT
EVENTS AT AURORA P G COLLEGE...
EVENTS AT AURORA P G COLLEGE & DEGREE COLLEGE
There are no events at Aurora P G College & Degree College scheduled currently.
AURORA P G COLLEGE... USER REVIEWS
AURORA P G COLLEGE & DEGREE COLLEGE USER REVIEWS
1 - 8 OF 8 COMMENTS
POSITIVE  |  NEGATIVE |  NEWEST  |  OLDEST  |  MOST HELPFUL  |  LEAST HELPFUL
USER RATING
3.3
4 USERS
Quality
Ambience
Service/Courteousness
Value For Money
1.0
1.0
1.0
1.0
S Mallesh on 23rd Aug 2019, 12:04pm | Permalink
Can I get admission in your college my cpget rark is 1410 ( MSc microbiology)
vamshikrishna on 4th Dec 2018, 7:55pm | Permalink
I am proud to be an aurorian but i saw the worst administration and faculty in my college and it is not good as you imagine fee what they are taking and the education what they are giving is not matching most of the students join in aurora because of placements but placements are not good. one of the clear example i'll give about aurora is, as i am a student of aurora college my attendence pencentage for the first year is 90+ and for second year is 87% and for the final year the percentage is 88+ and in 3 years i have a very good conduct in college and i don't have any single black mark in my behaviour and finally in TC(Transfer certificate) thet will provide some categories in that they gave me C+ in attendence category and they gave me "C" in behaviour and they gave me "C" in communication i have one doubt if i am not good in communication skills how can i select for process associate in AGS HEALTH for international voice process by that we can understand that they will not believe in there students that other company believe. if they believe me how can they gave me "C" category, for that i went to administration and class incharge they gave me reckless answers for that i felt very bad that i studied in these college and for some students faculty shown partiality even there communication is not good.... A part from all these reasons i saw some faculty i felt they are like my mother they are vert supportive and very good nature....These is all about administration and faculty but not about college. once again i am proud to be an aurorian...these is all about my opinion...Thank you
RATING
4
balaprasad biyani on 25th Sep 2016, 2:58pm | Permalink
in which mandal does the Aurora degree and pg college at chikkadpally branch of hyderabad comes in..........???
uday ananthula on 18th Oct 2014, 9:42pm | Permalink
Aurora it's d legendary college now a days the maintenance is inappropriate
Don't believe in college name believe in education
vasu on 6th Aug 2012, 5:21pm | Permalink
chutia college
abhishek agarwal on 16th May 2012, 7:59am | Permalink
want to join as early as possible . nice collage
ayuship on 6th Aug 2012, 5:24pm | Permalink
chutia college me admission mat le???
RAVE on 1st Oct 2011, 11:49am | Permalink
AURORA....the college vch doesnt even have a board naming dat its a college..and the principal boasts dat we dont advertise abt our college yet it is popular....at d first view...i was like wer d hell is dis college...and figured out dat the small cramped houses in narrow lanes is nothing but aurora campus....and the fee structure is way too high..for the same fee u pay in aurora..u can njoy a pleasant hifi college..wer u can excal..and i wud say dat the lecturers r educated..but are unfit to educate the student and the college ppl do full on show off....especially d principal...acts as if he is legendary...i agree dat he has got good ideas in mind but his ideology is d worst...and their runs an entire political system between the faculties of different departments..the good about dis college is the students the posh crowd and the college ppl take advantage of this crowd...for all the students i wud suggest to not to join dis shit hole!
RATING
1
No Need on 6th Jul 2013, 5:27pm | Permalink
i hav already joined in dis clg..........
Liteworker on 5th May 2010, 11:05am | Permalink
Hi,

ADVERTISEMENT
This page was tagged for
aurora degree and pg college at chikadapally
Auroracollageatnarayanaguda
arora callege chikkadpally
aurora College fee structure
Aurora's Degree and PG College Hyderabad, Telangana 500020
Follow @fullhyderabad
Follow fullhyd.com on
About Hyderabad
The Hyderabad Community
Improve fullhyd.com
More
Our Other Local Guides
Our other sites
© Copyright 1999-2009 LRR Technologies (Hyderabad), Pvt Ltd. All rights reserved. fullhyd, fullhyderabad, Welcome To The Neighbourhood are trademarks of LRR Technologies (Hyderabad) Pvt Ltd. The textual, graphic, audio and audiovisual material in this site is protected by copyright law. You may not copy, distribute, or use this material except as necessary for your personal, non-commercial use. Any trademarks are the properties of their respective owners. More on Hyderabad, India. Jobs in Hyderabad.