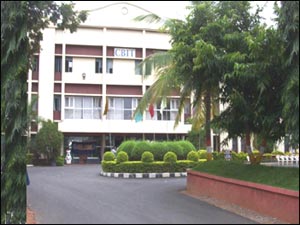 A MiniTaxi, for the uninitiated, is a three-wheeled freak-creation of mankind that may (highly) euphemistically be thought of as a stretch auto-rickshaw limousine. The MiniTaxi will be the first mystery that confounds you on your expedition to CBIT. Then you will board one of these (in a leap of faith) and actually reach CBIT, and wonder how you got there unscathed.

This will be the second mystery. But there is something an hour's commute (one way!) does to CBITians - it makes them think. Think about the number of speed-breakers between Mehdipatnam and college (the number has been counted by every generation, serious!), about the number of times one would have reached the moon if one travelled the same distance everyday vertically, and about why all professors shop at an alternate universe where green trousers and pink shirts (worn together) are a rage.

And sometimes what comes out of the overworked grey cells is quite staggering - an automobile prototype, the mother of all college cult-fests - Carpe Diem - a colossal ISTE technical event in March 2004, and an enviable placement scene - all conceived and executed by the junta on campus. There really isn't a dull moment (not counting the class-hours).

With 25 years of history and tradition, CBIT is a growing family. It was established as a self-financing institution in 1979 with the intention of producing quality technocrats in the sylvan surroundings of the Osmansagar lake with an investment of about two hundred million rupees. Integrating all CBITians, past and present, is an active alumni cell, which works through the college website.

The campus is perpetually abuzz with events and goings-on. Sports are an enormous passion. Every sport finds a following here - basketball and volleyball rule supreme, the ladies-cricket never fails to rock everybody's world, and the way all the folks get behind their favorite team during a contest creates an atmosphere that is nothing short of electric.

Technical events hosted by each department and cultural events conducted all year round keep the creative energy inspired. Shruthi, the college's annual festival, draws in droves, engineering students from all over the city.

With an ISO 9001:2000 certification, a recommendation by the AICTE for deemed university status and with most of the courses on offer rated 'A', CBIT's progress curve is steep. There are tie-ups with universities abroad, seminars by experts, and programs to extend technical support to industry and to promote research.

So, what does the graduating class take away with it at the end of its time here? Friends who are quasi-family now, memories of eons spent doing nothing, squatting at the numerous curb-stones strategically placed all over campus, and of the hours spent dissing the food at the canteen (which really is good, but hey it's against the pledge that every college-goer takes: "Thou shalt never praise the food at the cafeteria.").

ADVERTISEMENT
This page was tagged for
gandipet hyderabad map cbit
cbit junior iit college in Hyderabad
cbit feed back
CBIT collage s address
barkatpura to CBIT Gandipet
Follow @fullhyderabad
Follow fullhyd.com on
About Hyderabad
The Hyderabad Community
Improve fullhyd.com
More
Our Other Local Guides
Our other sites
© Copyright 1999-2009 LRR Technologies (Hyderabad), Pvt Ltd. All rights reserved. fullhyd, fullhyderabad, Welcome To The Neighbourhood are trademarks of LRR Technologies (Hyderabad) Pvt Ltd. The textual, graphic, audio and audiovisual material in this site is protected by copyright law. You may not copy, distribute, or use this material except as necessary for your personal, non-commercial use. Any trademarks are the properties of their respective owners. More on Hyderabad, India. Jobs in Hyderabad.