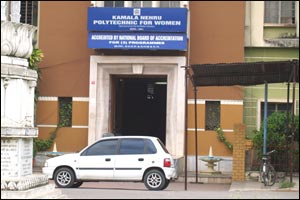 Priyanka Pulla / fullhyd.com
Compared to privately-run colleges of hotel management that look like diminutive versions of 3-star hotels, the Kamala Nehru Department of Hotel Management has all the regality of a VIP government guest house. The fact that it is run by the Exhibition Society, in whose grounds it is located, explains this. The department itself nestles on an upper floor of the Kamala Nehru Polytechnic building that stretches a long way along the perimeter of the exhibition grounds.

The high ceilings, red jute dhurries and wide staircases in the typically impersonal government institute ambience, make it look like the Kendriya Vidyalaya equivalent of degree colleges. Inside classrooms, the theme continues, but takes on a new character. The model restaurant, bedroom, quantity and basic kitchens are large scale and luxuriant simply by their dimensions. The restaurant looks like a government tea house, with classic lampshades: not lavish, nor junky, but the safe, standard and unclassifiable mean.

At the end of three years, placements are not just in hotels but in a wide range of other industries like airlines, schools, cruise-liners, government guest houses, teaching and food production. Indian Airlines, and the Taj and the Kakatiya groups come routinely, while fast-food chains in the US often pick students since the state board diploma makes the Visa process much easier. The Vattel Institute of France also offers fee waivers for students from here who wish to do their MBA.

The perks of studying at Kamala Nehru don't seem like a bad deal in any way, but it's the cost of it all that makes it really competitive. At Rs. 2,800 per annum, this is one of the cheapest hotel management courses in town. They offer a 3-year diploma as well as short courses in cooking and baking. The diploma includes a 6-month industrial training period, and by the time they finish, the girls are experts in twelve cuisines. This also happens to be the only women's hotel management college in town.

ADVERTISEMENT
This page was tagged for
hotel management landline numbers in hyd
kamal nehru polytechnic college in nampally
kamala nehru polytechnic college hostel
kamala nehru women's college nampally
kamala nehru polytechnic college offered departments
Follow @fullhyderabad
Follow fullhyd.com on
About Hyderabad
The Hyderabad Community
Improve fullhyd.com
More
Our Other Local Guides
Our other sites
© Copyright 1999-2009 LRR Technologies (Hyderabad), Pvt Ltd. All rights reserved. fullhyd, fullhyderabad, Welcome To The Neighbourhood are trademarks of LRR Technologies (Hyderabad) Pvt Ltd. The textual, graphic, audio and audiovisual material in this site is protected by copyright law. You may not copy, distribute, or use this material except as necessary for your personal, non-commercial use. Any trademarks are the properties of their respective owners. More on Hyderabad, India. Jobs in Hyderabad.