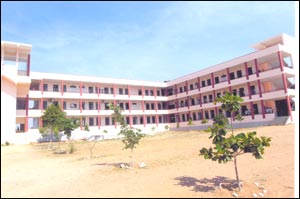 Deepa Menon, with inputs from Sridhar / fullhyd.com
Before it shifted address to the back of beyond, DVR had a few good things going for it - it was accessible, very active both academically and culturally, extremely well-equipped, and with a good track record of campus placements. Now that it's moved from Madhapur, DVR still keeps all its pros except for that first one.

Brought into existence by the Devarakonda Educational Society, DVR is a JNTU-affiliated college that's won several university gold medals for its academic performance. And a good chunk of these medals have been earned by the dynamic Mechanical Production department, which boasts some excellent work studios. Studies are clearly the thrust here, and the students have even found campus placements at companies like Infosys.

And although the management has a no-leniency approach to attendance, there is more to the college than just work. Their annual fest Dhoom is a very lively event that brings out the best in literary and cultural attempts. Apart from technical fests like Electra, students are also keenly involved in the orator's club, Vaktrutva, as well as the many seminars, conferences and workshops conducted by the management. Volleyball and cricket are the most popular sports on campus.

One of the main concerns among students here is the distance they have to travel each day, but the college buses are popular and very well-maintained. Since there are virtually no hang-out spots near and about, the canteen is a major adda for most everyone. Plans for a hostel are underway.

ADVERTISEMENT
This page was tagged for
news telugu dvr college
kashipur polytechnic college photos
dvrcet in local channel
dvr polytechnic college
dvr college of engineering kashipura
Follow @fullhyderabad
Follow fullhyd.com on
About Hyderabad
The Hyderabad Community
Improve fullhyd.com
More
Our Other Local Guides
Our other sites
© Copyright 1999-2009 LRR Technologies (Hyderabad), Pvt Ltd. All rights reserved. fullhyd, fullhyderabad, Welcome To The Neighbourhood are trademarks of LRR Technologies (Hyderabad) Pvt Ltd. The textual, graphic, audio and audiovisual material in this site is protected by copyright law. You may not copy, distribute, or use this material except as necessary for your personal, non-commercial use. Any trademarks are the properties of their respective owners. More on Hyderabad, India. Jobs in Hyderabad.